nib mor recently rebranded to address something most of us have probably felt before: the desire to eat something snackable and sweet. The mission behind the organic chocolate company’s rebranding was to meet its mission “to make guilt-free snacking chocolate the whole family can enjoy” while harnessing a feeling of “craveability,” according to company CEO Prabha Cheemalapati. But how did it achieve that perception of “craveability”? We spoke with Cheemalapati about nib mor’s packaging and logo rebranding to find out how it — with help from SRW Agency — transitioned from what she refers to as “dated” packaging to the colorful and eye-catching product line it has today.

nib mor was launched in 2009 as a line of chocolate snacks that were made in “bite-sized pieces” meant to be snacked on or shared. Cheemalapati explains that when it was launched, it was ahead of its time.

“It was an organic, non-GMO, gluten free, and vegan chocolate in a marketplace that really hadn’t started to adopt natural foods yet,” she says.

Originally, the chocolate was carried mostly in natural food markets, but as its popularity grew over the years and as it expanded into more stores, it became evident that it was time to give the brand a refresh. Cheemalapati explains that the packaging prior to the rebranding was too “serious” for a fun category like chocolate.

“If you saw nib mor a few months ago, what you [would] see is a brand that really was doing an excellent job of communicating organic as a key credential,” Cheemalapati explains. “But the packaging was pretty dated. … As we’ve seen our distribution expand and as we’ve really understood that it’s the whole family that’s snacking on nib mor, we felt a real need to upgrade and modernize the packaging.”

There were three key targets that Cheemalapati says the company aimed to hit with the rebranding:

First and foremost, the product line needed to show consumers just how delicious nib mor chocolate really is. This was achieved, Cheemalapati explains, by showing the real chocolate pieces and some of the ingredients on the front of the packaging.

“The pieces of chocolate and ingredients that we showcase on the front of the pack … are meant to signal that craveability,” she says. “So really to showcase the real ingredients, you see that it’s not illustrations of cherries and blueberries. And it’s really true imagery because we have real tart cherries and real blueberries in our chocolate. [It’s] meant to drive that taste appeal and craveability.”

The new branding utilizes some of the bright, playful colors that were used in the branding previously, but with a modern twist. The color also plays into conveying the product as delicious because it can be helpful in flavor navigation for consumers. For example, the mint product comes in a green bag, the cherry in a deep red, and blueberry in blue.

After being on shelf and in stores, it became evident from consumer feedback that nib mor’s many certifications were what set it apart from the competition. But when you carry so many certifications, making sure to balance the right communications on the packaging while keeping the branding straightforward and simple is crucial.

“The certifications that we carry — we have a lot of them — can be a mouthful,” Cheemalapati says. “But those really signify how much we care about the quality of the product, and meeting needs of consumers that are looking for things like gluten free offerings that are still delicious. Or vegan offerings that are still delicious, and we’re Rainforest Alliance Certified so that sustainability component is really important to us.” 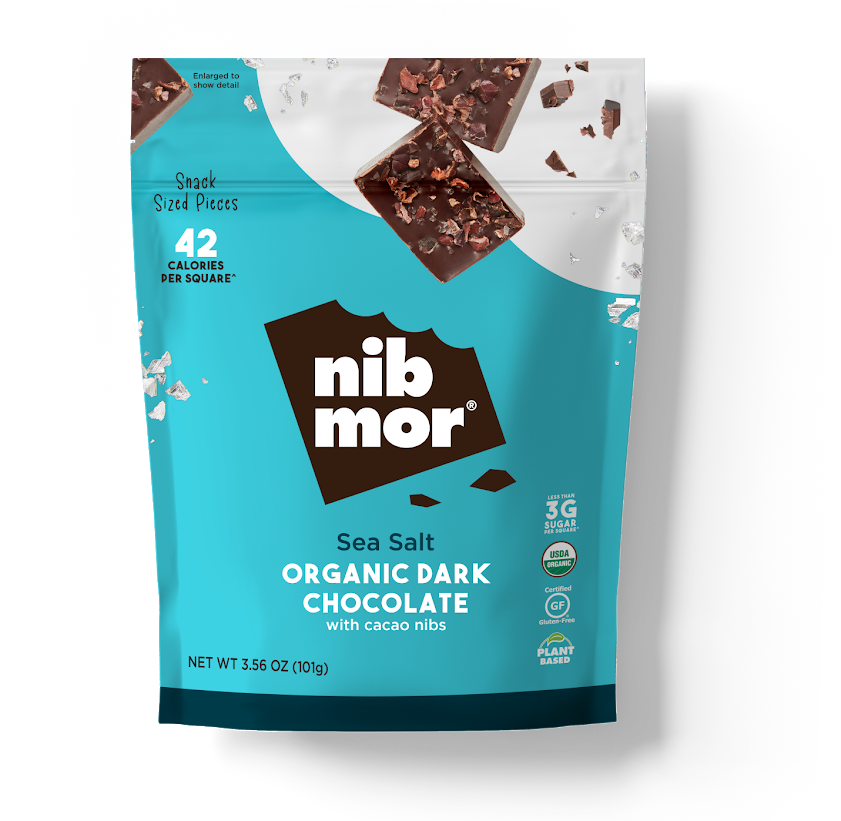 nib mor’s rebranding was intended to be more straightforward and playful.

Cheemalapati says that the most important aspect of this process was to communicate clearly what the purchasing drivers are for consumers. The second step was to make sure the packaging still had “shelf pop.”

“The more cluttered a package is, the harder it is for you to really stand out on shelf, because then you’ve got a tiny logo because you’re trying to put a lot of messages [on the product],” she explains.

The third goal was to shift the design relationship between the brand name and the word “organic” on the packaging. 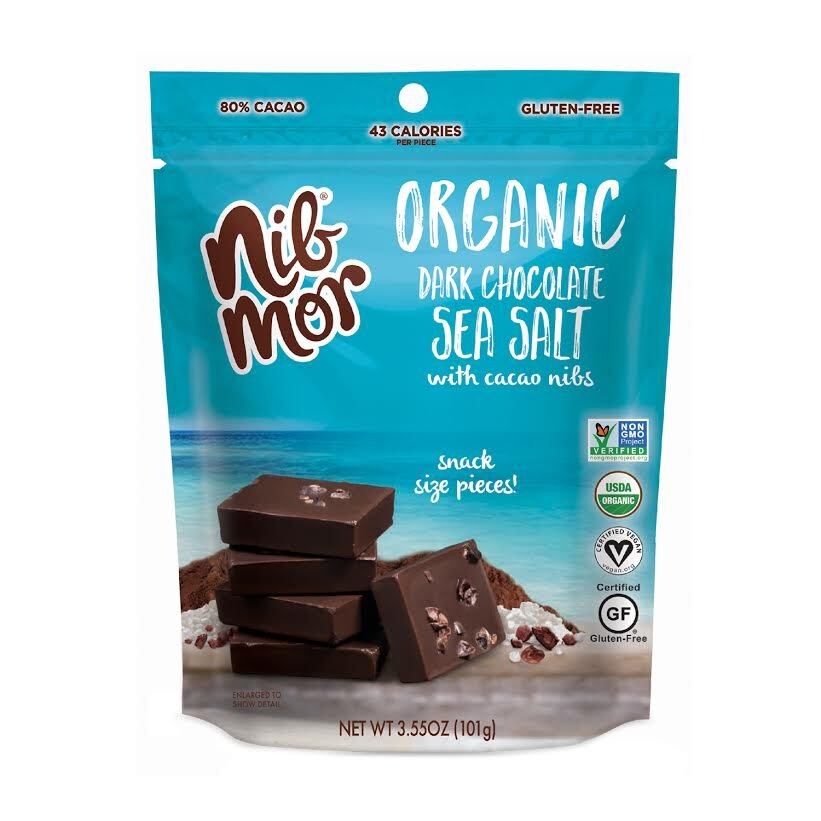 A Logo that Conveys the ‘Snacking Mindset’

The new logo was designed to connect with the “snacking mindset,” which is the mission behind the brand.

“We were intentional about having a couple of chocolate crumbs underneath and showing that it’s not meant to be this perfectly pristine bite that you’re having, but you’re enjoying it,” Cheemalapati explains. “It’s a true snack. So imagine when you eat a potato chip, your hands get dirty, that’s the experience, that there’s a little bit of mess that goes along with it.”

A Snack for Any Family

One aspect of the redesign that Cheemalapati touched on was that nib mor wanted to convey a feeling of “accessibility” to consumers. She explains that organic products tend to have a history of being “a little more serious” than other snack categories. The new, colorful packaging — with the bright colors and modern branding — is meant to evoke a more playful tone.

The packaging was also adapted to align more with other organic products on shelf when it came to the printing process. Cheemalapati says that the company was using spot gloss on the packaging to highlight some areas, but it moved to a full matte appearance to reinforce the organic credentials.

It also is introducing a new packaging format for e-commerce products — a 30-count bag of individually wrapped chocolate in a bag.

“We previously sold that in a 45-count box, and what we found with the growth of our e-commerce business is that that box wasn’t performing as well as we’d like when we ship it, in summer particularly, because it’s hot and we need to keep our chocolate cool,” she explains. “So we’re moving to a bag that still gives the same functionality of being a great home for the chocolates. But it also helps us from a distribution perspective, do that in a way that’s a little bit more efficient.”

Branding Packaging Ecommerce Profiles ashleyroberts
Channel Sponsors
BRAND United is made possible by the teams and companies who are the driving force behind innovative technologies that allow brand owners and marketers to create a unified customer experience.