The telecommunications industry is facing some of the most drastic levels of disruption out there, which is challenging brands to re-think how they communicate the value of their cable and internet services to customers and prospects. As the “cord-cutting” population continues to rise, companies like Spectrum, the official brand name for Charter Communications, have to find innovative ways to illustrate the value of traditional cable TV over streaming services like Netflix.

Spectrum is the second-largest cable operator in the U.S., surpassed only by Comcast, and the third largest pay TV operator. Similar to other telecommunication offerings in the marketplace, Spectrum knows the value of bundling services and creating a one-stop-shop approach for its customers. These bundles typically include high-speed internet and cable TV, packaged together with an attractive price. However, TV is one of those experiences that is better experienced through video rather than just illustrated using pictures of popular shows. In its latest series of marketing campaigns, Spectrum has found a way to bring the excitement of TV into the direct mail channel with the use of augmented reality.

The Challenge: Making Augmented Reality Worth the Effort

Augmented reality (AR) is not a new tactic in direct mail. In fact, marketers have been experimenting with the experiential digital technology for a few years. Some marketers have found more success than others, and a key to that success is in making the experience of AR worth the effort it takes to view it.

Because this technology is still in its infancy, there is still a significant level of friction required on the part of the audience to view it. In most cases, an AR experience begins by using a smartphone to scan an image or 2D code. Sometimes it’s a QR code, and sometimes it’s an image or logo specific to an AR reader app. In the case of AR reader apps, this often requires even more steps (i.e., friction) if the user has to download the app first.

Spectrum’s use of AR has its fair share of friction for the user, but it is also a unique and innovative approach to making that friction worthwhile. In this campaign for a TV and internet bundle, Spectrum has featured a humorous AR video featuring Kevin Fredericks (AKA KevOnStage), an up-and-coming comedian and YouTube star performing some of his own (yet still topical) standup material.

The mail piece, shown below, includes very clear instructions to download the Zappar app in order to view the video, which makes the process a lot less intimidating and easy to follow. 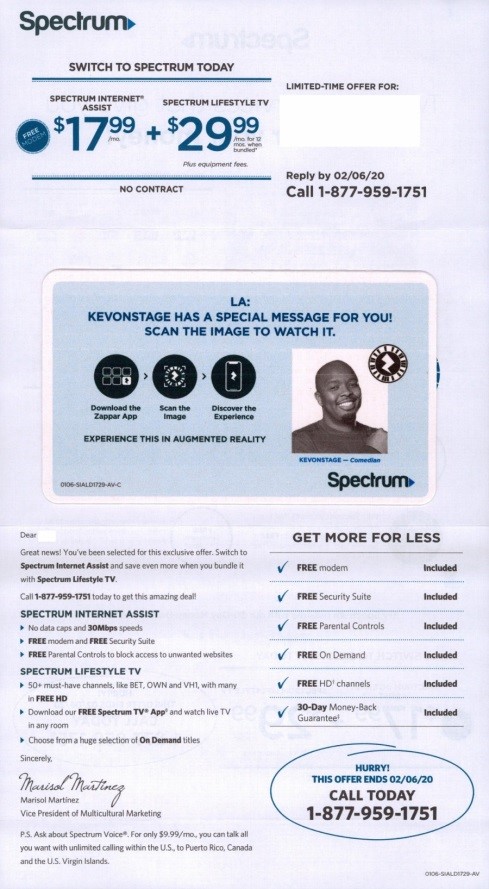 Once the app is downloaded and the image is scanned, Spectrum rewards the user for going through the trouble of downloading the app with a video that is not only entertaining and funny, but a longer-lasting experience than most AR visuals utilized in direct mail today.