Brands aiming to 'fix' the planet turn to innovation

In the past few of my “Mr. Reality Check” articles, we touched on a variety of important points centering on the wonderful world of single-use plastic. I provided you with information on the Great Pacific Garbage Patch (GPGP) and discussed how innovators within the industry are addressing plastic use and waste. Admittedly, this is a daunting subject. The current system is failing, with many believing that recycling doesn’t work and isn’t the answer. According to a recent Forbes article, there are three main culprits:

An overarching theme of my “Mr. Reality Checks” is that we need to focus on the reduction and reuse of plastics, not just recycling, which according to Forbes and others, will never work the way we need it to. There’s still too many holes in the infrastructure. But hope and heroes are on the horizon.

Before we get to that, let’s look at another example of a real-time plastic problem — rivers — and what’s being done about it.

Rivers are a major source of waste, with much of it flowing to the oceans. Although oceans get the majority of public attention, rivers are just as bad — if not worse. The Ocean Cleanup Project estimates that 1,000 rivers are accountable for nearly 80% of global annual plastic emissions, with small urban rivers among the most polluting. Scientists know that if waste can be cleared from rivers, it reduces the amount reaching the oceans.

Here’s an example of one innovator who is addressing the problem. You might remember me discussing the Ocean Cleanup Project’s initiative to accumulate great amounts of plastics from the GPGP with huge plastic-collecting trawlers. In Guatemala, they’re tackling what is believed to be the most polluted river in the world. They erected a fence that allows water to flow through, but captures a lot of waste. Still in the experimental phase, this effort aims to correct and strengthen the weak links and eventually stop plastic waste from reaching the ocean. Success from innovators like this could be the proof governments and industry need to advance this kind of intervention.

What about the wildlife? Are they getting caught in the fence, and is this solution even viable until they address that issue? Probably not. At the end of the day, you want to eliminate plastic waste, but not at the expense of fish and other wildlife. We’ll keep an eye on how this solution progresses.

Now let’s talk about some of the other heroes out there; because there are many that work tirelessly on saving the planet. As cliche as that may sound, successful innovators aren’t tackling the entire planet, but instead finding a niche to pick apart and improve. The accumulated results of their efforts is what will eventually have the greatest impact. As Industrial Physics puts it…

“It’s pointless to dabble in sustainability, you have to commit and develop milestones—where do you want to be? Where are you now? How much progress are you making? You have to gauge your momentum.”

Industrial Physics, a leader in the product and packaging integrity testing solutions category, polled nearly 260 of the top packaging firms to determine what investments companies need to make to implement more sustainable packaging. They discovered that 6 out of 10 manufacturers are investing in sustainable packaging to reduce their environmental footprint. They also found that flexible paper/fiberboard and biodegradable packaging are the most widely used sustainable materials, replacing:

In addition to packaging, innovators are looking at ways to address the recycling problem—many pulling their ideas from science.

Plant-Based Bottles to the Rescue

We know that there is ongoing research to find alternatives to plastic bottles. New ground is being broken in this area by brand partnerships, such as the one between Carlsberg and Coca-Cola. With the help of chemical company Avantium, they’ve produced a plant-based bottle that can replace conventional glass or plastic. As for the traditional inner plastic layer, that’s being replaced with sugars extracted from corn, wheat, and beets.

According to an Avantium spokesperson, the product’s sustainability credentials are strong because, “it uses no fossil fuels and can be recycled – but also degrades in nature much faster than normal plastics.” These plant plastic bottles are resilient enough to be used for carbonated drinks. They are fully recyclable and decompose in one year using a composter. Trials also indicate that the bottles decompose in normal outdoor conditions.

Innovative partnerships like this one hold a lot of promise. But, as always, without the sorting and other infrastructure methods in place, it is still an idea in the making.

A friend’s daughter brought this one to my attention. Spearheaded by YouTube stars MrBeast (97 million subscribers) and Mark Rober (22 million subscribers), along with the Ocean Conservatory, TeamSeas is using the power of social media to crowdfund water and beach cleanups around the world. With the aid of thousands of YouTube creators and millions of fans, every dollar raised helps them remove an estimated pound of garbage from beaches, rivers, and oceans, with the goal of removing 30 million pounds over the next three years. They’re targeting areas where the conservation need is greatest, like UNESCO World Heritage Sites, Marine Reserves and the Caribbean. Last year, TeamSeas removed a whopping 63,000 pounds of trash from two beaches in just 4 days in the Dominican Republic (DR). To-date, the DR video has been viewed more than 64 million times and TeamSeas has raised nearly $33 million.

Hey Humans — A Study in Responsibility

I first noticed the brand Hey Humans through an eye-catching endcap display at Target. With the tagline “There is No Planet B,” Hey Humans is a personal care line of deodorants, shampoos/conditioners, lotions, and other care products that are clean, safe, and performance driven. Their products are 99% plastic free (their toothpaste cap is the only culprit, but even it’s made from plastic waste), cruelty free, and free from parabens, phthalates, and silicones. This brand hits the mark on clever packaging with a concise, sustainability-driven mission. 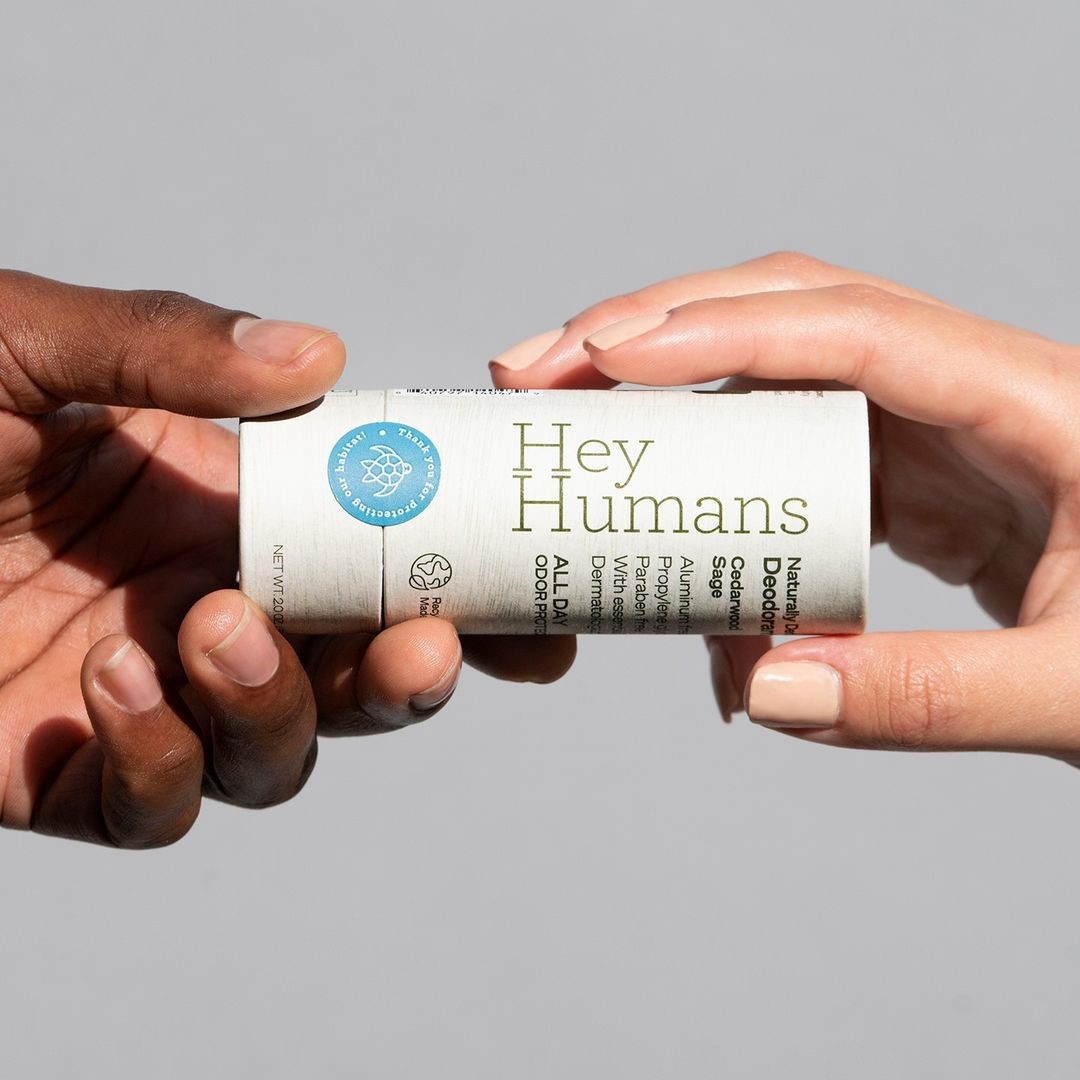 In early April of this year, the Lego Group officially opened its corporate headquarters in Billund, Denmark. After five years of planning and construction, the state-of-the-art campus kept sustainability and social responsibility top of mind, leading them to achieve a Gold level LEED certification. One of the coolest attributes? All of the outdoor furniture is built from more than 11,000 pounds of recycled Lego bricks. That’s a lot of Legos! Other notable green additions include:

Packing material, CD cases, disposable cutlery — it has been discovered that a certain beetle larvae can survive on a diet of Styrofoam and other plastic waste. Scientists at Australia’s University of Queensland discovered that these superworms — the larvae of Zophobas morio darkling beetles—could hold a key to reducing plastic waste. These scientists envision creating recycling plants that mimic what the larvae do, which is to first shred the plastic in their mouths then digest it through bacterial enzymes—what they refer to as enzyme engineering. I’ll report back on any major buggy advances. 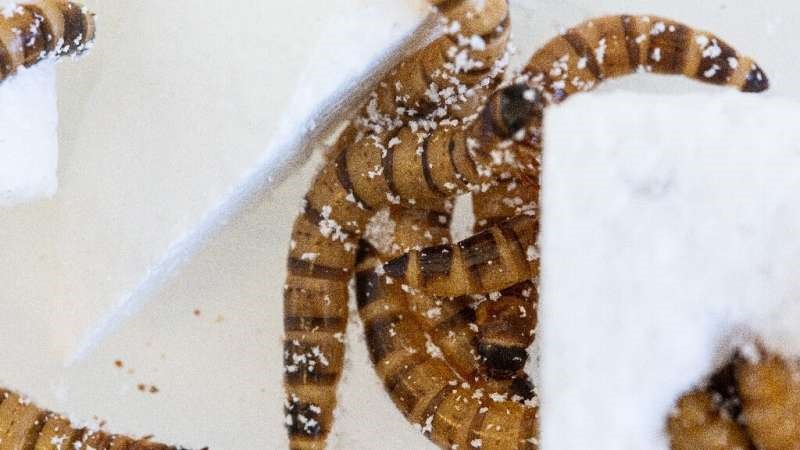 Sustainability and social responsibility are hot topics right now. A simple Google search of the word sustainability lists a whopping 11.5 million hits. According to a 2020 Global Buying Green Report, 74% of consumers are willing to pay more for sustainable alternatives. But that was two years ago. I wonder how this perspective has changed with the supply chain and inflation issues we’re experiencing in 2022? Maybe I’ll tackle that in my next article.

Branding Cause Marketing/Corporate Partnerships Packaging Trends/Analysis tomnewmaster
Channel Sponsors
BRAND United is made possible by the teams and companies who are the driving force behind innovative technologies that allow brand owners and marketers to create a unified customer experience.