Knowing that Disney has a knack for surprise and delight, we predicted back in 2019 that the company would raise the bar for streaming services marketing, by sending innovative Disney+ mail to subscribers. With a slew of creative mailers used to drive anticipation for new originals, Disney+ has lived up to expectations.

Recipients are, in fact, so delighted by these mailers that they take photos and share across social media, thereby becoming brand advocates.

Disney+ has used innovative, contextually relevant formats to drive interest in upcoming premieres. Mailers, as you will see in the examples below, quickly became keepsakes for delighted fans, and helped Disney+ stand out from the crowd at a time when consumers were streaming more video than ever.

Ahead of the Loki launch, Disney+ sent mock recruiting mailers for jobs at the fictional Time Variance Authority. One recipient called the piece “cute” and asserted that they would keep it as “a fun little piece of memorabilia.”

In another interesting example, Disney+ sent a “travel brochure” for Kumandra, the fictional land in which the film Raya and the Last Dragon takes place. The brochure included a map of the place, cultural information, and even a recipe for “Raya’s Sword Sticks.”

Before the premiere of the Marvel miniseries The Falcon and the Winter Soldier, Disney+ mailed some fans a disc with the trailer. 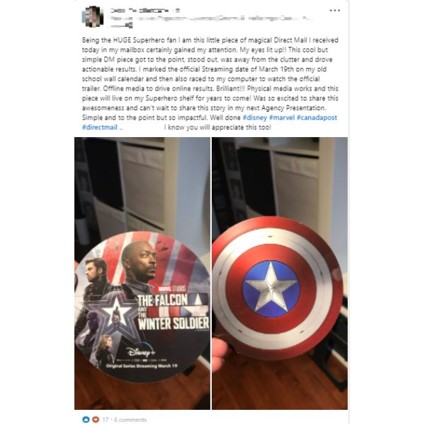 Physical media is not only unexpected (especially from a streamer), but also has physical weight to make the mailer stand out from other pieces in the mailbox. The disc featured the iconic Captain America shield design that fans would have immediately recognized.

A recipient who works in direct mail expressed excitement on LinkedIn, while another, on Twitter, expressed joy at receiving the mailer.

Finally, ahead of the WandaVision premiere, some subscribers received a promotional mailer with the feel of a TV Guide. The mailer included a spread about WandaVision, as well as information about The Falcon and the Winter Soldier and other titles streaming on Disney+.

At a time when consumers were mostly looking for memorable entertainment they could enjoy at home, Disney+’s mailers helped make the streaming video experience more multidimensional. The fact that it used mail to enhance a digital experience, and that its competitors weren’t in the mailbox trying to do something similar, made Disney+’s approach all the more special. As such, Disney+ may be setting itself up for longer, more satisfying customer relationships than other streamers.