Maybe all you need is love, as the Beatles famously sang, but colorful hot foil stamping and finger-pleasing embossing are powerful stuff, too. Especially in this elegant Beatles-themed playing cards set from masters of the premium card market, Theory11.

Inspired by the Fab Four’s 8th studio album, “Sgt. Pepper’s Lonely Hearts Club Band,” this collector’s box is a stunning blend of psychedelic color and super-detailed iconography that impresses you more and more the longer you examine it. Much of that is down to the jaw-dropping precision our friends at print shop Studio On Fire achieved laying down various colors of hot foil, working closely with designer Ty Mattson of Mattson Creative. 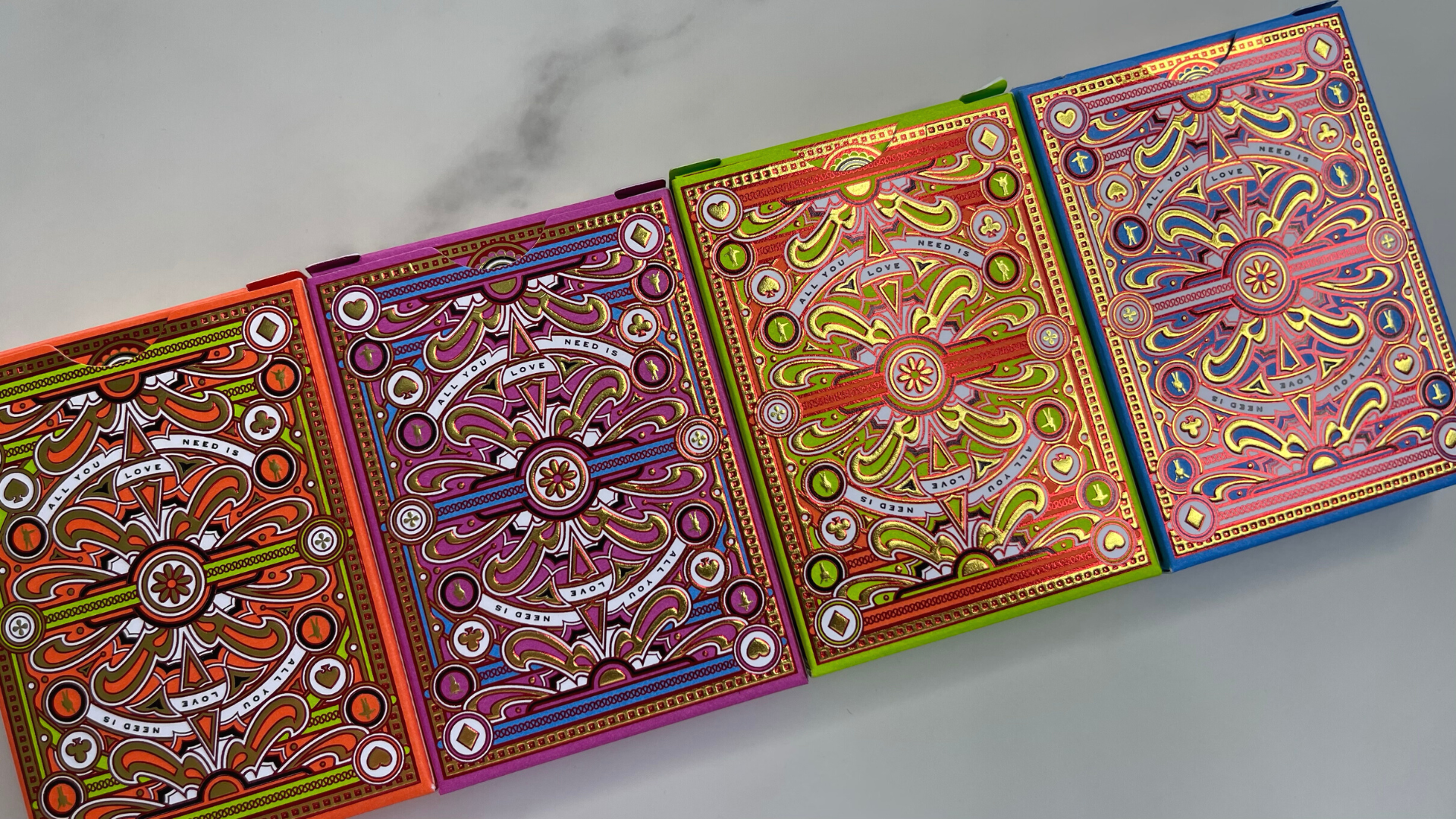 Let’s start with the collector’s box, made from Neenah Folding Board Natural White Vellum.  At the center of the lid, The Beatles name is foiled with a beveled emboss, surrounded by a host of different hot foil stamped design elements in White, Gold and Black foils, as well as further embossing still.

These elements run the gamut from stylized card-suit symbols – hearts, spades, diamonds and clubs – to more obscure graphic nods to the band’s output, such as their individual silhouettes from the cover of the album “Help!” in the four corners of the lid. 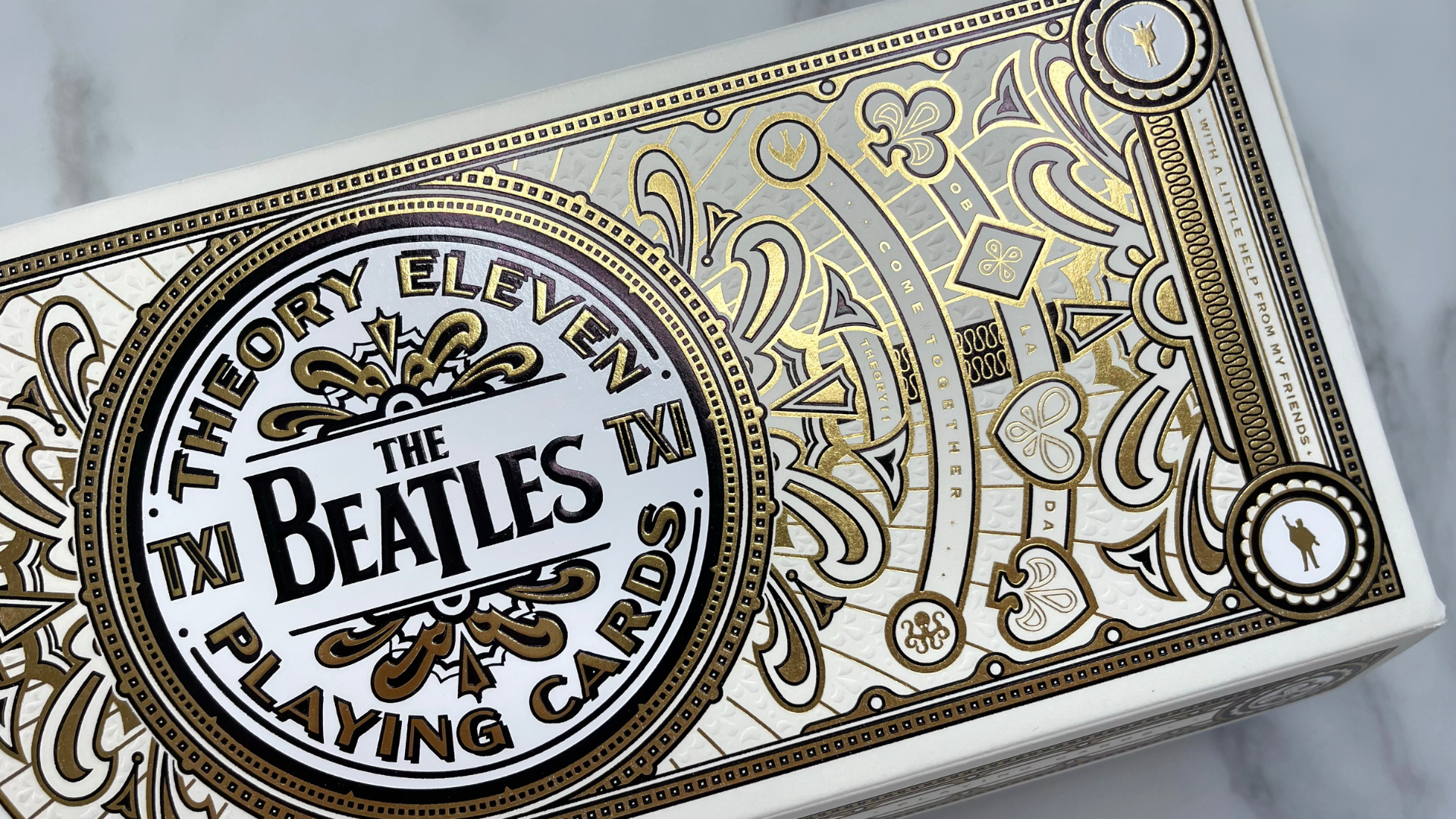 On the side flap, another silhouette of the quartet appears, this time from the “Abbey Road” cover. Lifting the flap reveals the song title “All You Need is Love” in hot foil which, like most aspects of this packaging, is further enhanced with embossing. The flap closes with a satisfying “plop” thanks to a magnetic closure – always a nice touch! 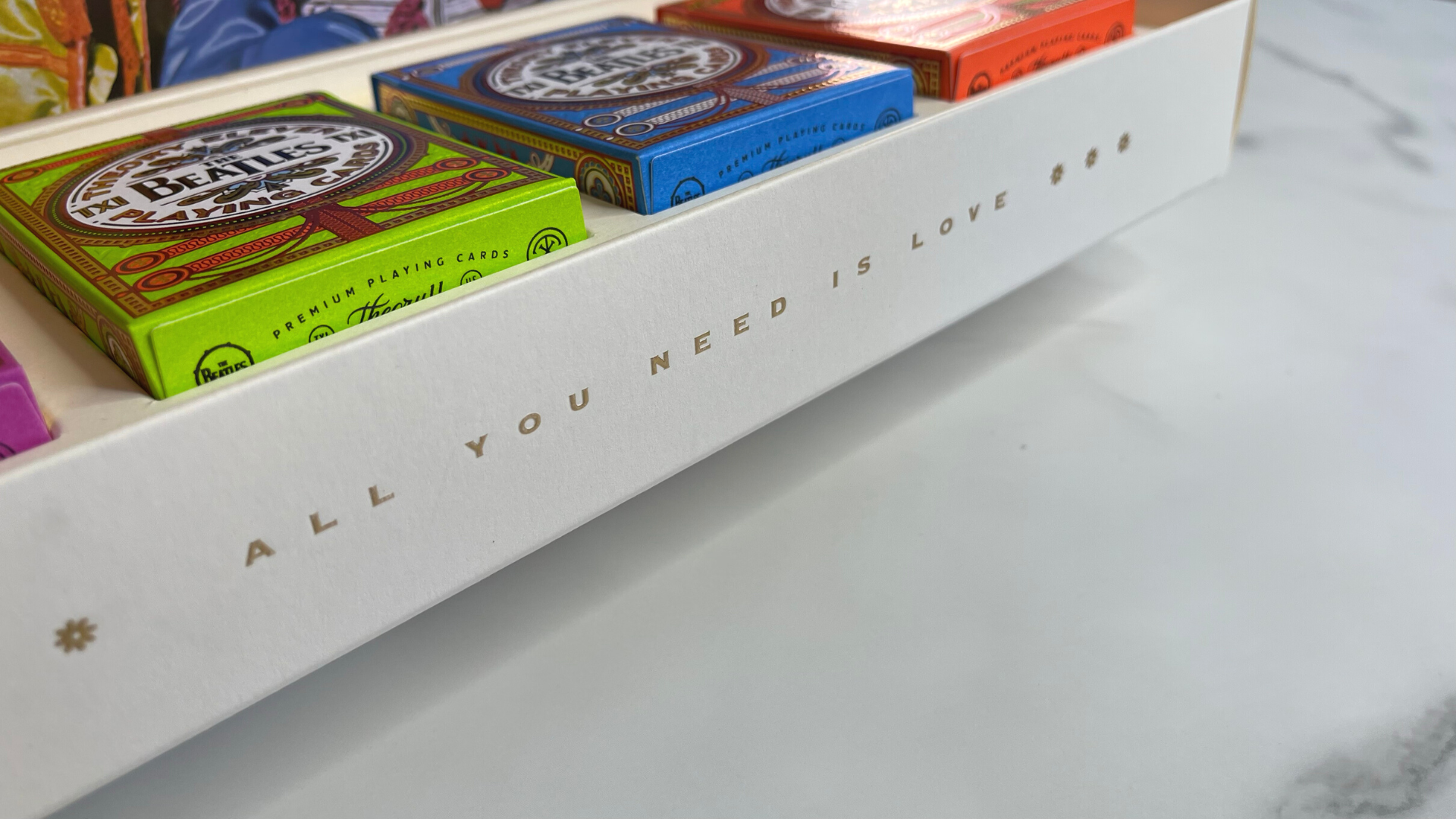 On the inside of the lid, The Beatles appear in their Sgt. Pepper’s uniforms – offset printed and tipped in – opposite 4 different playing card tuck boxes.

Each box is color coordinated to match a particular band member’s uniform – offset printed on Neenah Classic Crest Solar White Smooth with 4 spot colors, an aqueous coating, and stamped with Red, Gold and Black foils. When the display box is opened, each tuck box is positioned beneath the Beatle they’re meant to represent, resting snuggly in a die-cut grotto in the display box. The front of each tuck box features hot foil stamped brocades and other design touches inspired by the Beatles’ uniforms. 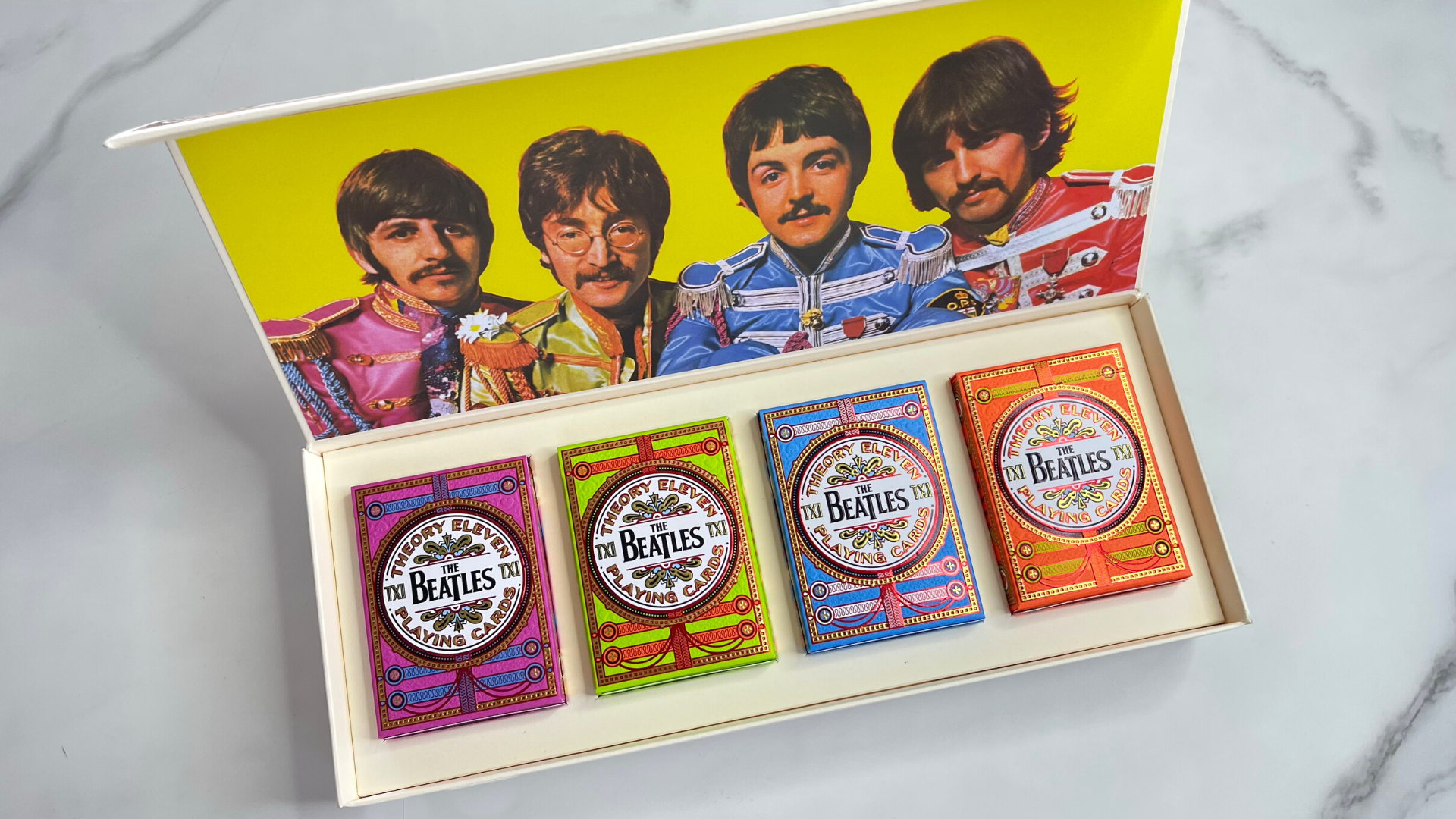 There’s a lot going on here with intricate design flourishes realized in hot foil, all in super-tight registration. Take a look at the “Abbey Road” Beatles in Red as they walk across the Gold foil of that famous crosswalk, and you’ll appreciate why Studio On Fire is so well known for their stunning work. It’s simply one more example of how, decades later, the Fab Four are still getting by with a little help from their friends. 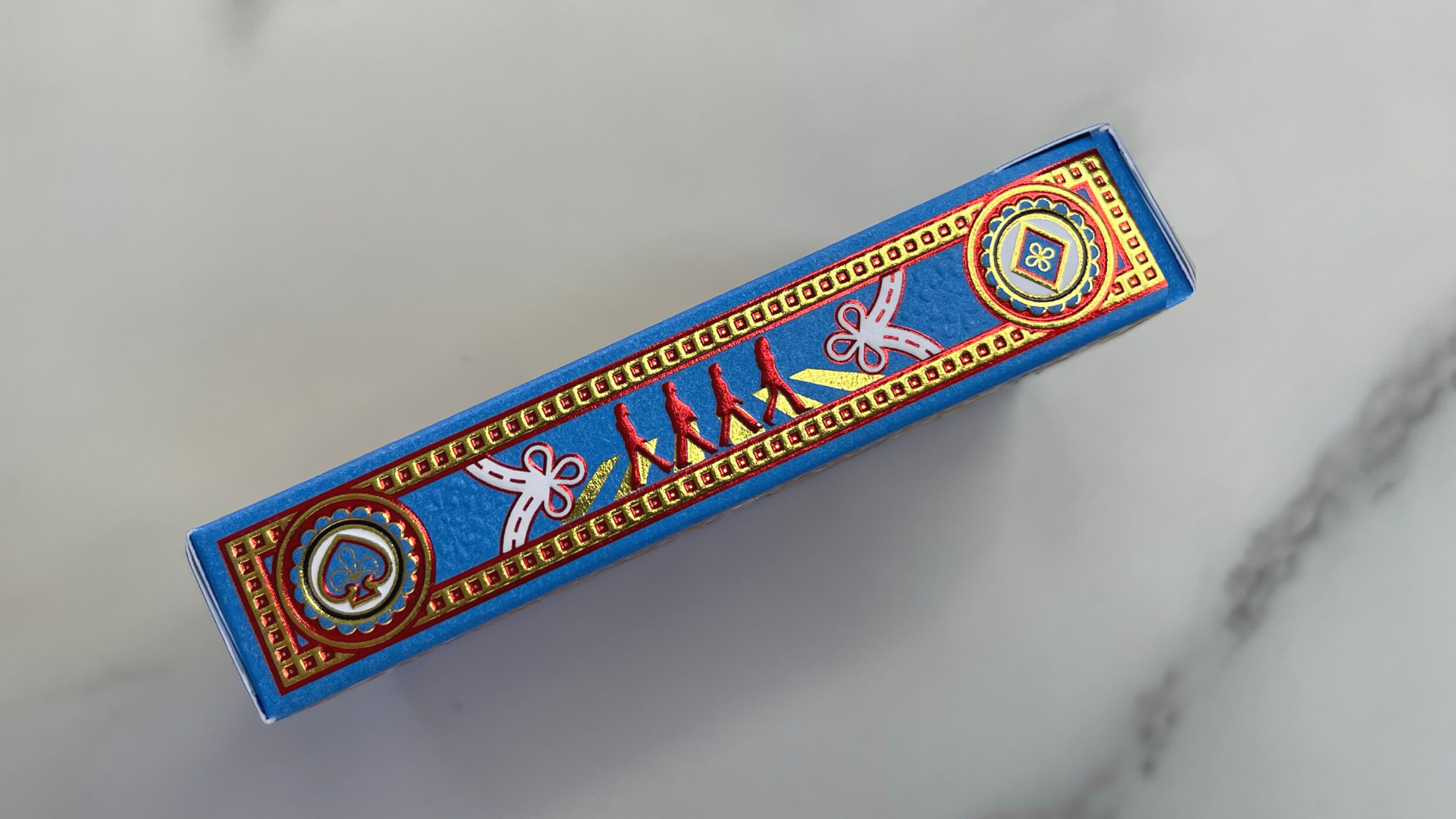 Branding Packaging Experiential Case Studies sabinelenz
Channel Sponsors
BRAND United is made possible by the teams and companies who are the driving force behind innovative technologies that allow brand owners and marketers to create a unified customer experience.