We are well into the holiday retail season and “it’s beginning to look a lot like Christmas…” — especially if you’ve been walking around in any large city as the huge holiday windows twinkle and shine.

Traditionally, in the retail industry, the winter holidays include the months of November and December, and cover major consumer shopping events such as Thanksgiving, Christmas, Hanukkah, and Kwanzaa.

This year, the National Retail Federation (NRF) reports that nearly 91% of consumers plan to celebrate the winter holidays — and approximately 46% of holiday shoppers started browsing and buying seasonal items before Halloween. This year, inflation may be motivating many consumers to get a head start on the season. According to NRF’s consumer survey, 44% of holiday shoppers believe it’s better to purchase holiday gifts and other items now, in case prices continue to rise, and another 31% believe the best deals are already available.

In order to meet this demand, retailers started bringing in product earlier than normal, stocking holiday merchandise earlier to ensure they had inventory in place for the start of the season. Some even launched holiday sale events as early as October.

Overall, holiday sales in November and December have averaged about 19% of total retail sales over the last five years, but the figure can be higher for some retailers. So, ensuring consumers are walking in the door is extremely important to brands.

One large piece of the holiday retail puzzle are the window displays, beckoning shoppers to stop and browse — and hopefully purchase products before moving on their way. Windows displays — which can include everything from animatronics to high-fashion mannequins surrounded by elaborate sets — date back to 1874, when Macy’s founder R.H. Macy is said to have debuted the city’s first holiday window display when its flagship department store was on 14th Street.

These window displays are no small feat. In an interview with Retail Brew, Manny Urquizo, Macy’s director of storewide visual campaigns and windows, who led the creation of the 2022 Macy’s window with the theme “Give Love. Give Style.” indicated that the full process for creating the Macy’s holiday windows — from design conception to building — takes eight to nine months. 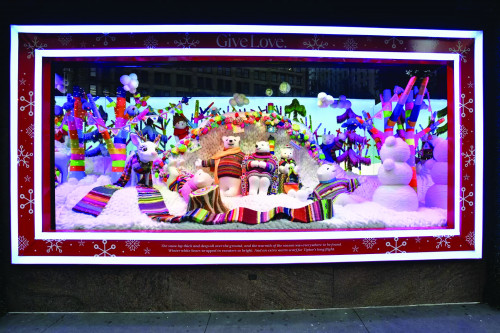 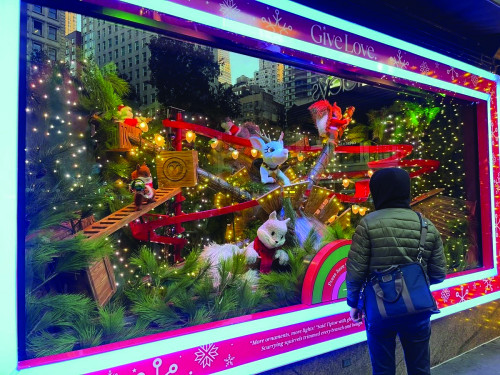 For print service providers (PSPs) working with retail customers, the winter holiday season is what could be considered the crowning achievement of nearly nine months of work as the displays come together. Take a look at some of the holiday windows that have caught our eye this year.

NYC-based Duggal kicked off the season with a window display curated for Kiehls.

With thirty years of experience, Dashing has three locations, two in Australia — in Sydney and Melbourne — and one in Shanghai. Dashing works with many of Australia’s leading retailers, partnering with its clients to design and deliver the ultimate customer experience.

In 2022, LEGO brought Christmas to life through the lens of their inner child. Dashing worked with their team for the brand’s festive campaign, encouraging everyone to build their holiday and ignite their imagination. The windows use a combination of decals, vitrine cabinets, and lightboxes to create a 3D effect with a sense of depth. Dashing designed, produced, and installed the project in fifteen stores across Australia. 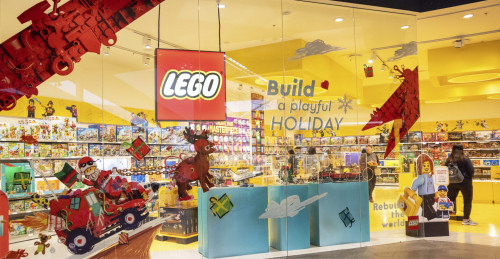 Based in London, UK, The Graphical Tree has been in business for more than 15 years, specializing in large-format printing, exhibition stands, signage, vinyl cut decals, retail window graphics, and installation.

This year, it worked with Liberty, a London designer department store, to create its festive windows. The Graphical Tree produced a series of colorful print and cut vinyl decals applied to the glass of the icon department store’s windows. These borders act as centralizing frames, and support the displays put together by the window dressing team. 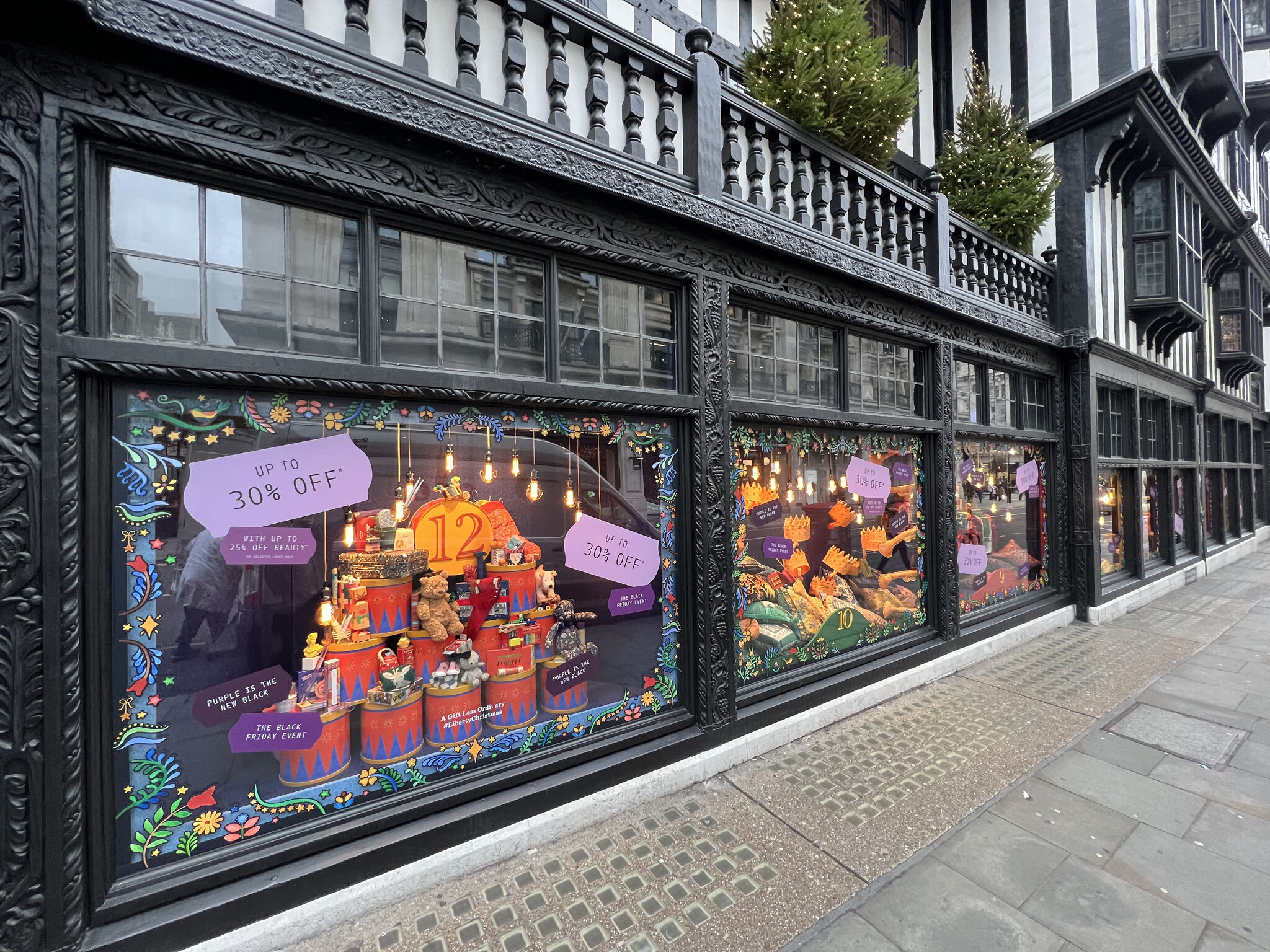 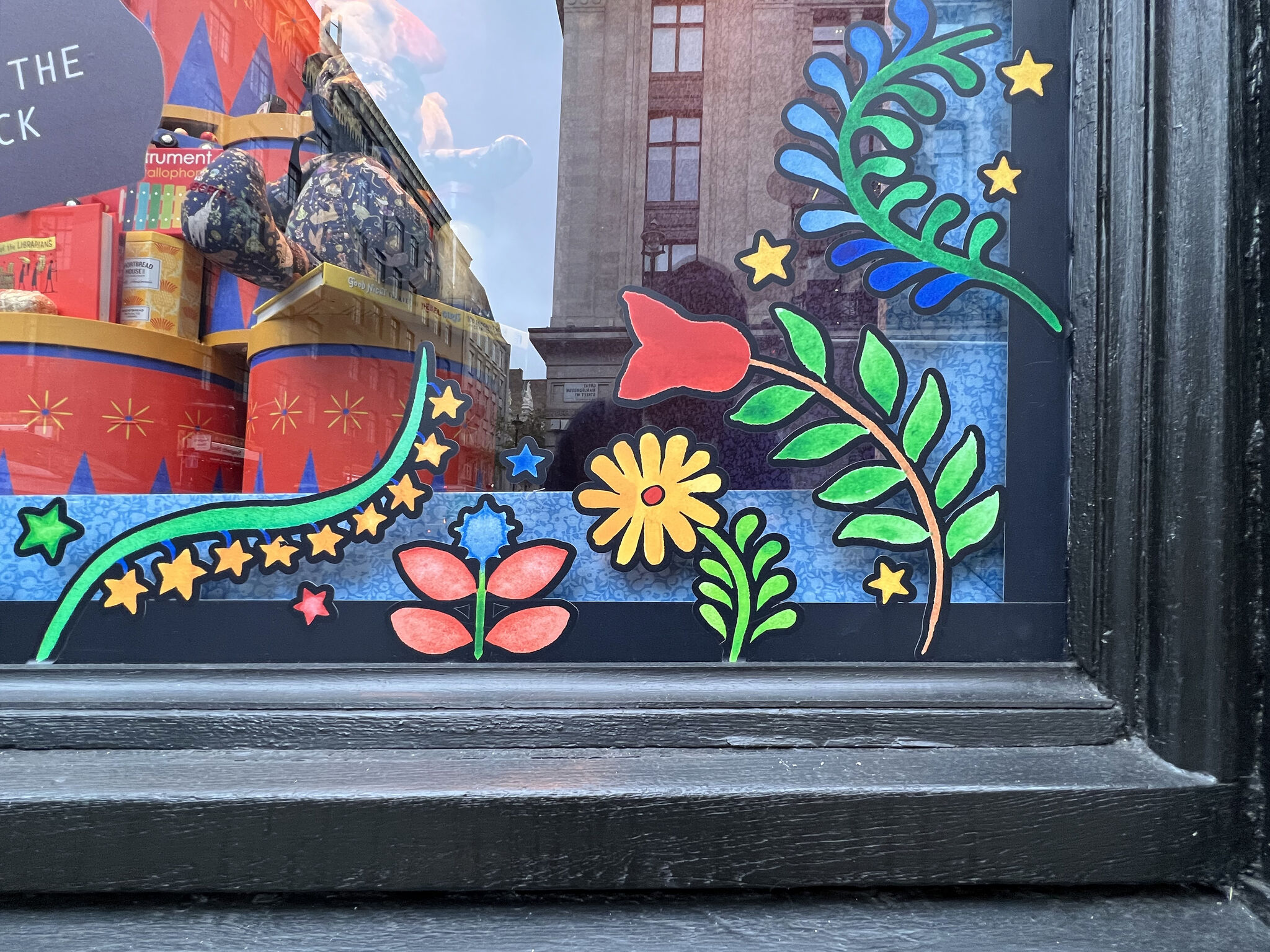 For three decades, Styleprint Pty Ltd. based in Kilsyth, Australia has injected the industry with a dash of pizazz, a sprinkle of uniqueness, and a heaped serving of creativity. From digital to screen-printing, small-format, table-cutting, offset printing, die-cutting on multiple machines, customized packaging, and everything in-between; the company combines evolving technology with experience to make it happen.

Chad Suhan, global store experience specialist, Cotton on Kids, highlighted on LinkedIn the third and final chapter in the company’s three months of Christmas campaigns. The December installment “ALL THE FAVES” combined Marvel and Disney.

“We are beyond excited to see our product shine, whilst paired back with incredible POS and neons, delivered by Styleprint Pty Ltd.,” said Suhan. “This was potentially one of my all time fave campaigns to work on and came together just as I hoped!”

Dashing also partnered with Regent Seven Seas Cruises to bring their partnership with David Jones to life at their flagship store in Sydney. Dashing created a highly integrated campaign with multiple touchpoints, including three window displays and a concierge-style space — working on the project from the design concept through to industrial and technical execution, installation, and bump out.

Dashing aimed to inspire travel dreams with window concepts that captured the magic of cruising, the excitement of discovering new destinations, and the longing to be immersed in blissful luxury. By capturing the colors and scenery of the Mediterranean from the ultimate comfort of your cruise ship, the windows bring dreams within reach, and world travel back into our everyday lives.

The activation showcased three luxury windows. The first one presented a dining concept, including a 3D perspective built with an 85-inch frameless TV, a golden ceiling, wall ribs fabricated from the composite panel, and tile marble floor graphics. The next window was branded with hero imagery and a QR code to discover promotional offers. The third display revealed a Mediterranean concept, also creating a 3D perspective with an 85-inch TV and a backdrop surrounded by panoramic coastal views, including luxury bag props from David Jones and floral graphics. In-store, the concierge lounge combined refined furniture with another screen on a built media wall. 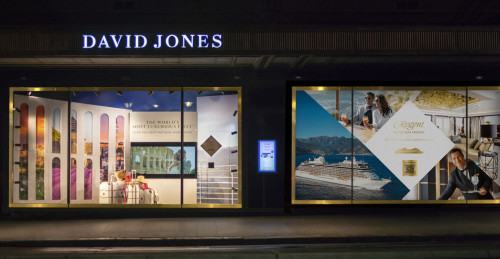 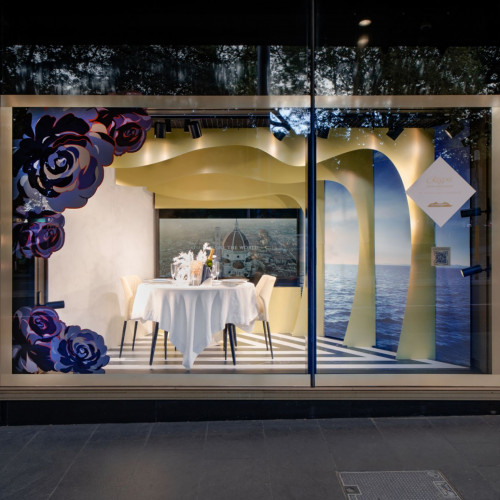 Harvey Nichols went all out with sparkle, mirrors, and metallics, to create something truly mesmerizing and eye-catching, that excites its customers when shopping this Christmas.

The Graphical Tree played its part in the displays with specially printed metallic gold and silver vinyl, and supporting decals produced and installed across the festive Harvey Nichols store windows. 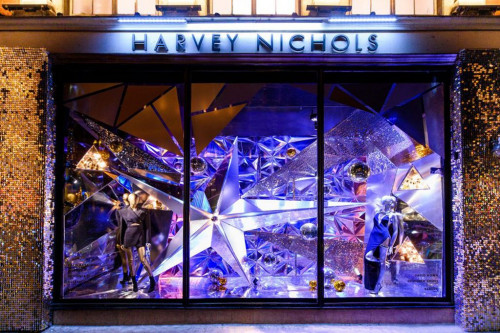 This is a little something to get your gears going.

In 2021, together with Harrods, Visualise created a large-scale augmented reality experience which blends their famous Christmas window displays with hyper-realistic 3D animations, all delivered through next-gen WebAR technology in a mobile browser.

Visualise was tasked with adding an extra dimension to the 2022 displays by turning four of the department store’s windows into a live augmented reality experience. The creative brief was to design something that would play on some of the more traditional elements of Christmas, such as toys and Christmas music, but then add an unexpected twist to the experience.

Visualise proposed to create an ‘automaton’ character — an early form of self-operating robot made popular in the 19th Century — complete with a Harrods ‘H’ breast plate. At first, the automaton appears as a clockwork toy, moving awkwardly in time to Swan Lake as if perched on a music box. Mid-way through the animation, the character becomes ‘self-aware’, removes the mechanical restraints from its feet and begins freestyle dancing in the window. As a further surprise, the robot jumps up and smashes the window with a kick mid-dance, before finishing up and collapsing back into its starting position.

To make everything look as realistic as possible, Visualise’s development team used 8th Wall’s image and SLAM tracking software, together with a custom-built suite of tools to track the animation perfectly to the windows. Finally, Visualise added the facility for users to capture and share their experience, which until very recently was virtually impossible in a browser. 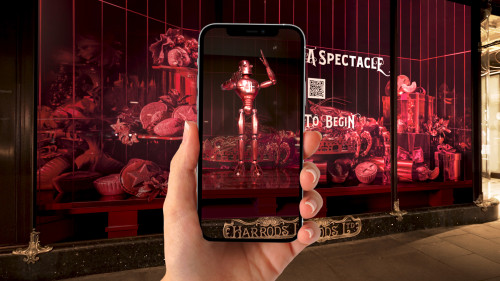 Marketing and Sales Wide Format Brick & Mortar Store dgustavson@napco.com
Channel Sponsors
BRAND United is made possible by the teams and companies who are the driving force behind innovative technologies that allow brand owners and marketers to create a unified customer experience.