There was no changing his mind – my FedEx guy insisted on a signature for the package. Seriously? As one of those “please leave it at the door” kinds of people, I wasn’t happy.

Still, I have to admit the bright blue box in his hands had me very intrigued. What can I say, I caved. Eagerly I opened the box, especially once I glimpsed the multicolored Google logo where the sender’s address should be.

I would find out soon enough. Inside the blue box I discovered another, this one a simple white one that felt gorgeously super-soft to the touch, imprinted with the Google logo in an elegant gray. Nice.

My curiosity was ratcheted up another notch…

Lifting the lid I found a bright blue bellyband wrapped around an elegant laptop cover – it invited me to a “face-to-face” video meeting. 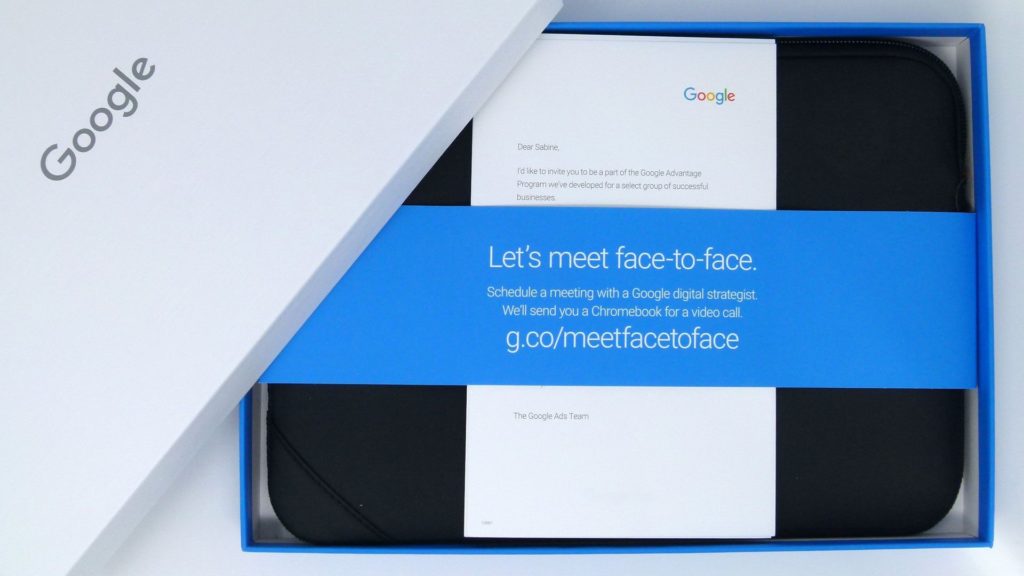 And this brings me to my favorite part of the package.

As you will have guessed, there was a personalized letter enclosed, but not simply thrown loosely in the box – clearly this was created by a perfectionist. Instead, the letter was held in place with a loop at the back of the bellyband. Note to self: ingenious! (The letter itself invited me to get on a video call with someone at Google who could help me build a customized marketing plan, with the promise of receiving an HP Chromebook 11 laptop to use for that call.)

Watch my unboxing of this Google direct mail piece:

And Then Came the Icing on the Cake

No matter how you looked at it, this was undoubtedly a very impressive mailer. But this being Google, I should’ve known to expect a little something extra.

The moment I returned to my desk, I received a short, well-thought-out email message that made me feel part of a select group of people Google was looking to partner with.

Wow! Now how do you suppose they did that?

It’s pretty obvious, of course, once you think about it. The moment the FedEx guy recorded the package as having been delivered in person (that pesky signature again), that notification triggered the email message. Clever.

While the first email was followed by two more reminders, what really stood out for me was the way the marketing team at Google had oh-so-smartly combined great direct mail with email into one unified experience.

While I have no information on the success rate of this specific campaign – at the time of this writing no one from Google was willing to comment on this – my crystal ball (as well as my gut instinct as a business owner) tells me that the physical mail/email combo is an idea well worth “borrowing.”