Should Scratch and Sniff be Part of Your Next Campaign?

In December of 2021, a friend of mine messaged me and asked if I had opened the latest issue of National Geographic magazine and noticed the scratch and sniff application that it used. To my delight, I found the page featuring the scratch and sniff section and was amazed that it had been used to give readers the chance to smell an extinct flowering tree: the Hibiscadelphus Wilderianus. Scientists were able to resurrect the scent using DNA, even though the tree hadn’t bloomed in more than a century. It was the first time I had seen scratch and sniff in a magazine, and according to the Editor’s Note in the issue, it was only the second time the magazine had used the technique. 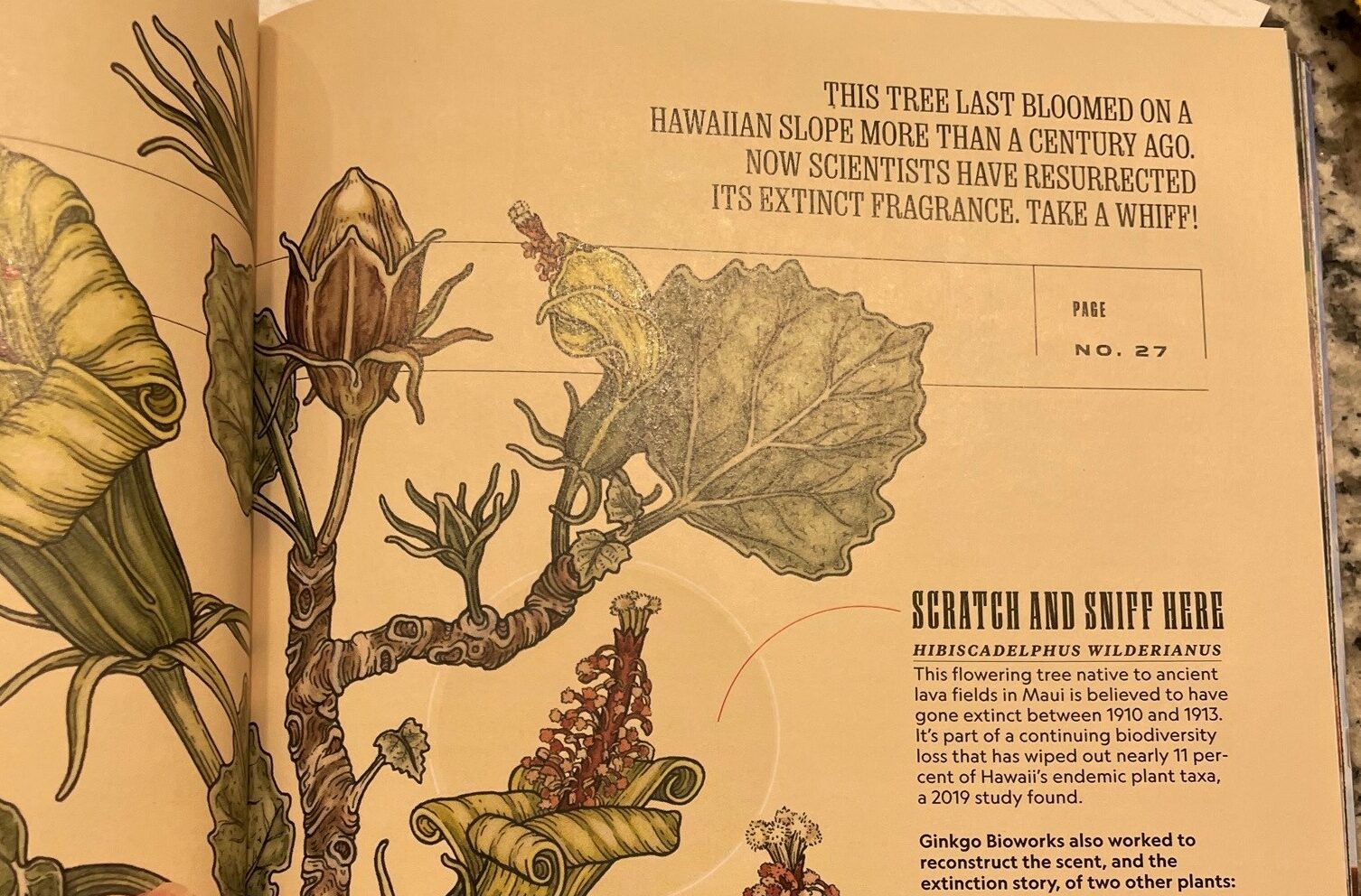 National Geographic included a scratch and sniff application in its December 2021 issue.

Scratch and sniff has been around for ages — according to Encyclopedia.com, it was debuted as Scratch N’ Sniff in 1965 by 3M. I distinctly remember a book from my childhood that featured page after page of scratch and sniff. It was used so vigorously over the years that eventually all that was left were pages gouged from years of me and my sister scratching at the pages. The combination of multiple senses when interacting with print is powerful, so when I received a scratch and sniff postcard with a recent online order, it struck me as an area of opportunity.

Broken Top Brands sells candles with varying scents, so when I opened the box for my recent order and noticed a postcard featuring scratch and sniff applications for two of its scents — ones that I hadn’t ordered — I realized that it was a brilliant marketing move. 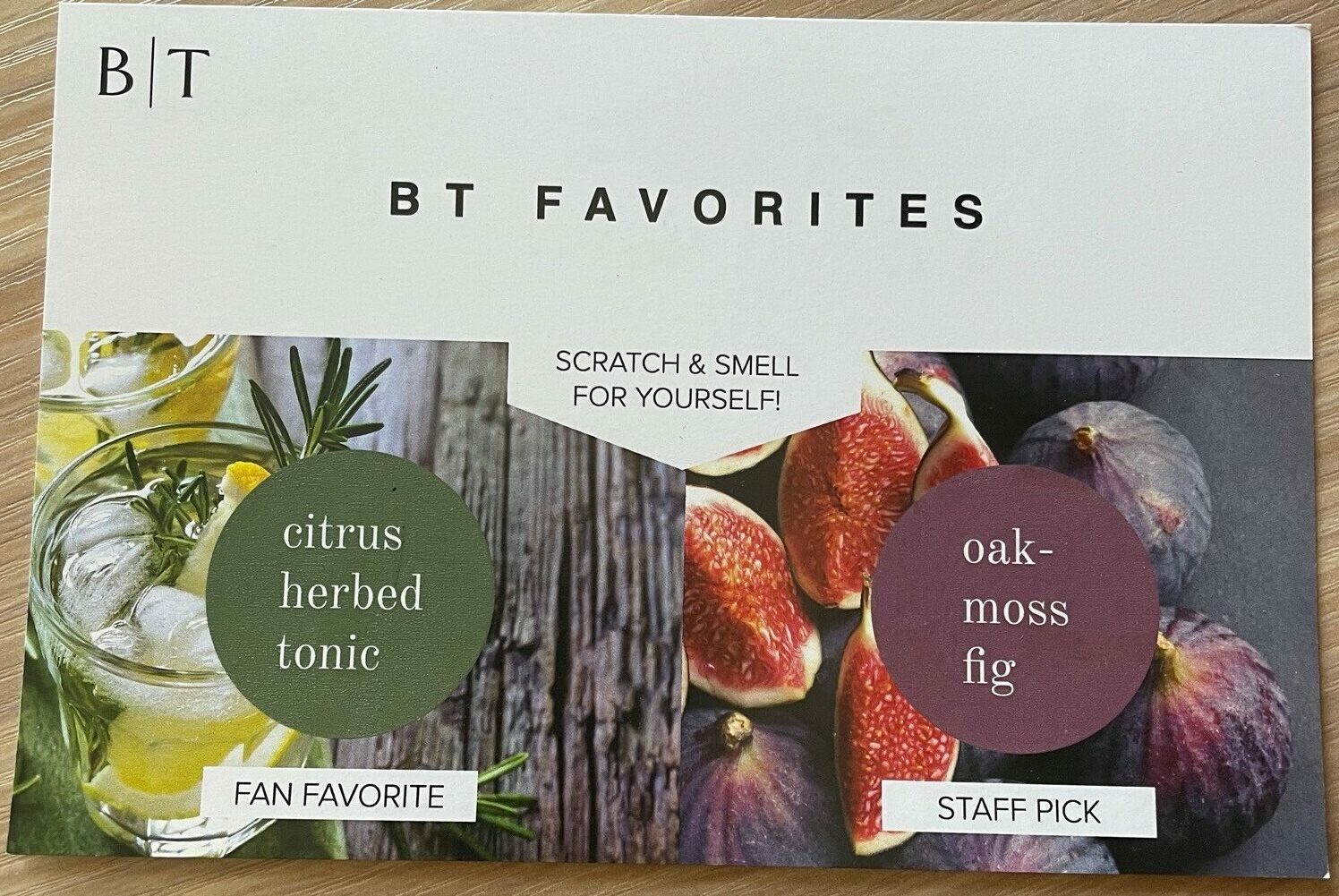 Broken Top included this scratch and sniff postcard with a recent order, allowing the recipient to “test out” different candle scents.

Although I hadn’t ordered “Citrus Herbed Tonic” and “Oak-Moss Fig,” Broken Top was giving me the chance to test them out, probably with the hopes that I would love the scents enough to place a second order, or consider the scents for a future order. With a product that is based entirely on scent, a move like this makes almost too much sense. With a quick search, I realized that at least one other candle brand has done something similar — Yankee Candle has distributed scratch and sniff catalogs in the past.

It got me thinking that this process could be used for more than just candle brands and for more than just direct mail. What if your local pizza shop sent around direct mail with the tantalizing scent of pizza included on the mailer, or if your favorite cookie brand included scratch and sniff on its packaging to let you “test out”  the smell of a new cookie flavor?

I would love to see scratch and sniff utilized more in direct mail and packaging. It might not be feasible or cost effective for every brand or for every campaign, but it’s a tried and true method to encourage people to interact with a printed product and engage multiple senses. If you’re interested, reach out to your print service provider (PSP) and ask what your options are and if they have the capabilities to add this technique to your next printed piece, or if they can direct you to a PSP that can provide those services.

Have you seen any instances of scratch and sniff used in an interesting way or do you want to share any ideas? Let me know in the comments.

Creative Commercial Direct Mail Direct Mail Columns/Opinions ashleyroberts
Channel Sponsors
BRAND United is made possible by the teams and companies who are the driving force behind innovative technologies that allow brand owners and marketers to create a unified customer experience.