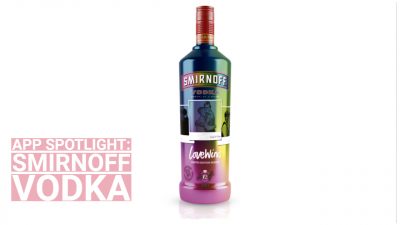 On a recent episode of App Spotlight, a series that highlights interesting and engaging examples of visual communications on our sister brand Printing Impressions, we highlighted a special, limited-edition version of Smirnoff’s classic vodka that celebrates the LGBTQIA+ community during Pride month.

Each bottle varies slightly and features different images of real couples proudly displaying their love, while the typical red Smirnoff logo is replaced with a rainbow one.

Some brands celebrate Pride with a show of support on their packaging or advertising, but Smirnoff takes it a step further by donating $1 from each bottle to support LGBTQIA+ causes through a partnership with the Human Rights Campaign. Smirnoff makes it clear on the bottle that inclusivity and support of this community is important to the brand, which it echoes in a recent ad in the HRC member magazine, extending its print impact.

We spoke with Jose Gorbea, Global Head of Brands, Agencies, and Sustainability Innovation at HP, about the campaign. He explained that the designers working on the campaign used HP SmartStream Designer software to drop in the user-generated content, creating one-of-a-kind bottles with varying images and colors, while HP Indigo digital devices were used to print the packaging.

Gorbea goes on to note that while both the U.K. version and U.S. version are striking and powerful, the U.S. version, with images of real people, conveys people’s stories more deeply.

The U.K. version of the “Love Wins” campaign for Smirnoff.

“It allows you to see the person for who they really are and how they celebrate their own relationship,” he explained, “ … they also take it beyond the bottle to the shipping cases, which become a wider way to signify this movement.”

He continued by adding that the real power behind a campaign like this is that, “whenever something is unique, it has more value.”

In all, it’s great to see companies supporting marginalized communities and giving back, and when print is a driving factor behind a campaign, it can prove to be very powerful.

If you have a cool printed application you want to share, let me know!

Creative Personalization Packaging ashleyroberts
Channel Sponsors
BRAND United is made possible by the teams and companies who are the driving force behind innovative technologies that allow brand owners and marketers to create a unified customer experience.