Verizon Fixed Wireless Marketing Stands Out from the Competition

Fixed wireless marketing spend is expected to be big in 2021, and so far Verizon is leading the pack. It drove 81% of fixed wireless spending in Q1, when compared to T-Mobile and AT&T. And while Verizon’s fixed wireless availability is not as broad as T-Mobile’s, nor as established as AT&T’s, the brand is investing millions to stand out. It used vastly different marketing approaches for its two fixed wireless services, while AT&T re-entered mail, and T-Mobile was quiet.

It’s not just wired broadband providers that are facing more competition from fixed wireless, but carriers appear to be competing against each other in some DMAs, too. Top-mailed markets such as Birmingham, Ala., and Cleveland, Ohio, saw multiple carriers promoting fixed wireless in mailboxes.

Verizon used digital advertising to spread the word for its 5G Home service — even though the product is sparsely available. This marketing may help drive a deeper connection between Verizon and 5G in consumers’ minds. Meanwhile, the carrier used direct mail to sell its cheaper, more widely available LTE Home — investing an estimated $1.2 million in promoting the service.

In mailers targeting pure prospects, Verizon featured a $60 per month price point. Existing wireless customers received offers for LTE Home at a rate of $40 per month. 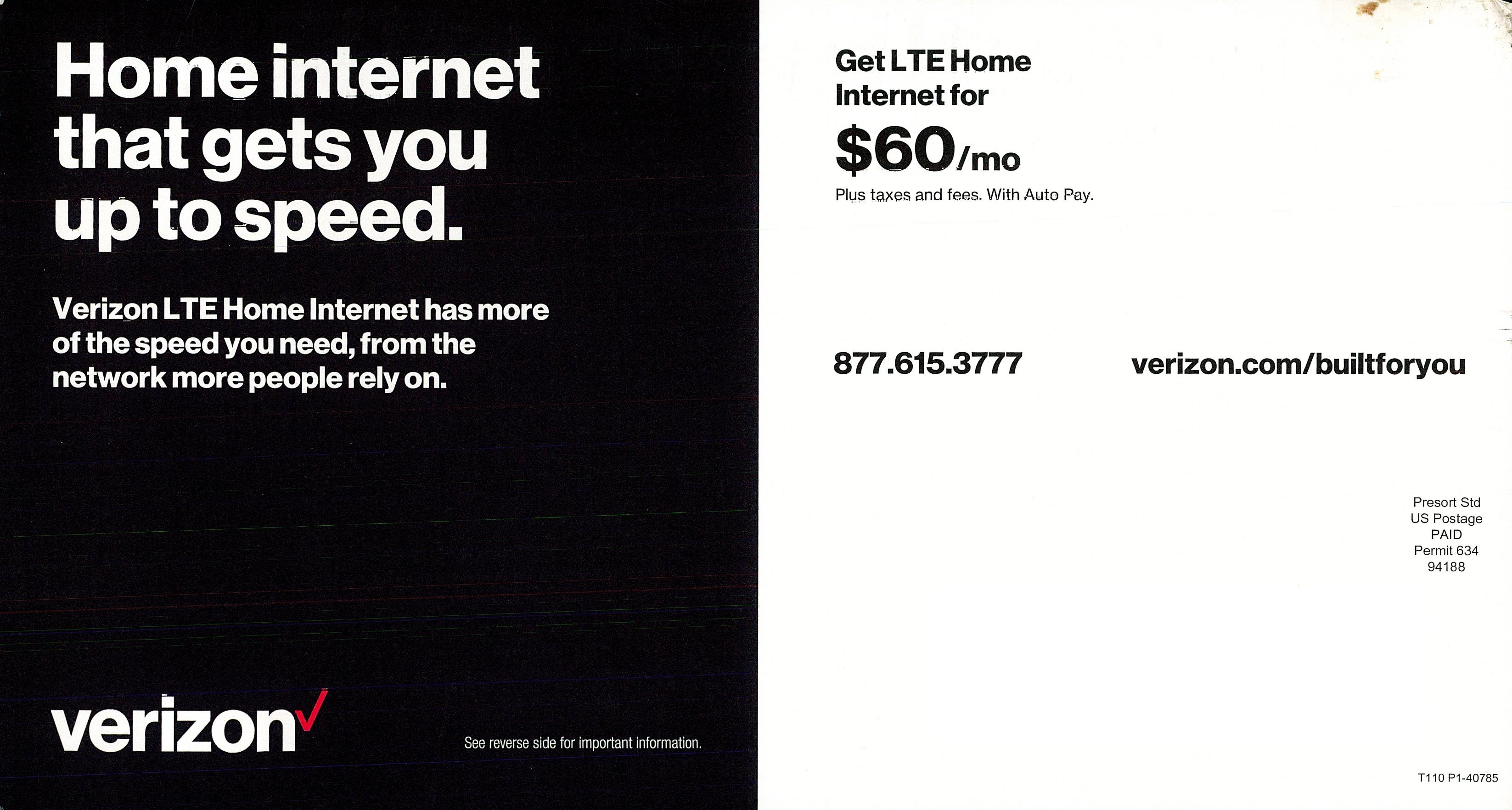 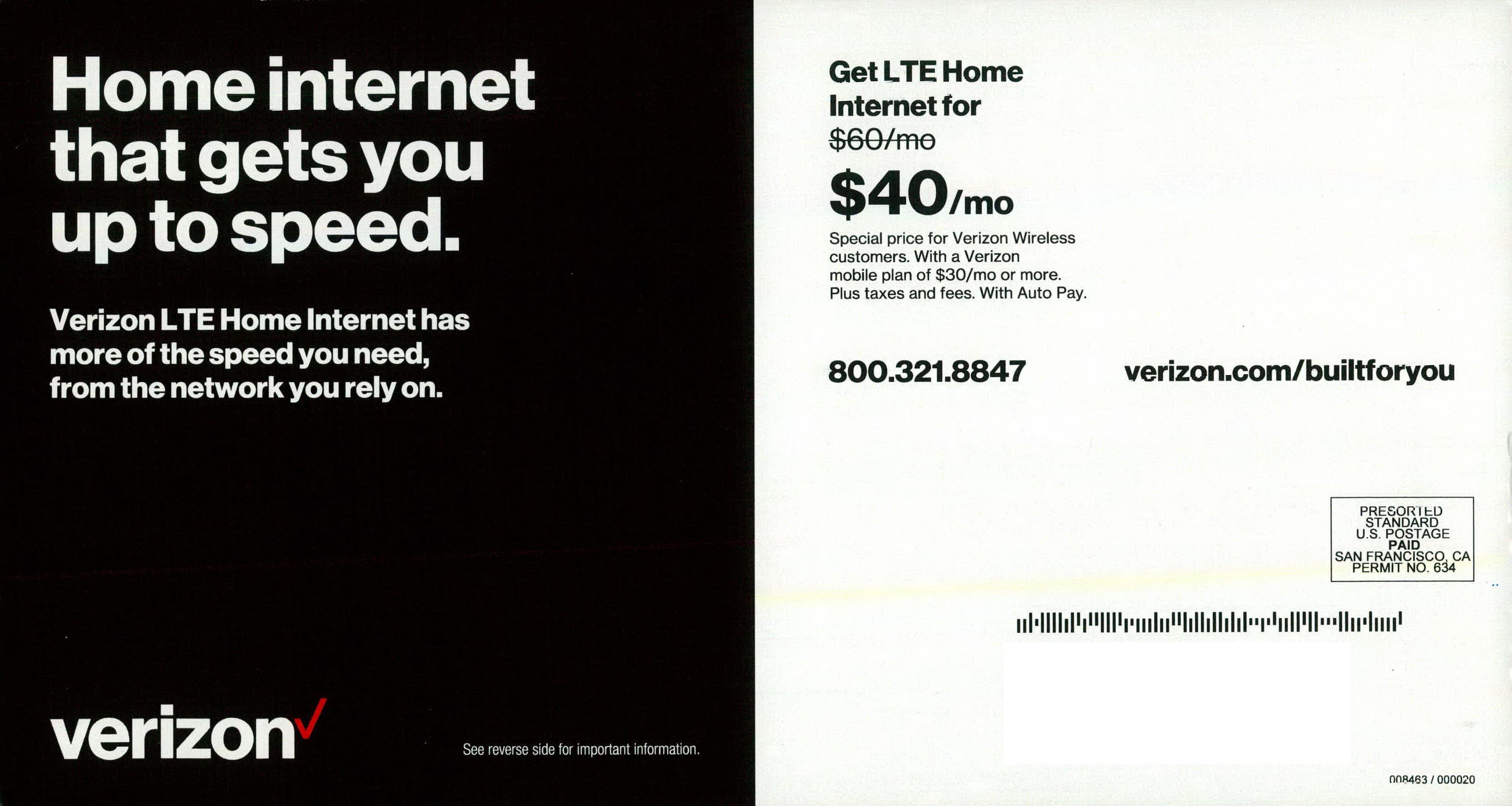 In addition to ramping up direct mail promotions for LTE Home in March 2021, Verizon increased its email marketing for the service in April 2021. The email enabled Verizon to target existing wireless subs with the reduced bundled rate for LTE Home.

Although less widely available, Verizon tried to build hype around 5G Home, running banner ads across tech, sports, cooking, and general interest sites. The company hasn’t been actively promoting 5G Home in the mailbox, which reflects the fact the product is only available at a handful of locations in certain markets.

Emails featuring incentives such as a free Chromebook or free Discovery+ were observed with volumes below 50,000, suggesting a highly targeted segment of customers. Verizon may have determined that it would have better luck driving 5G Home adoption by targeting its existing wireless customers living in qualifying areas, rather than spending on expensive direct mail campaigns to pinpoint such limited areas. 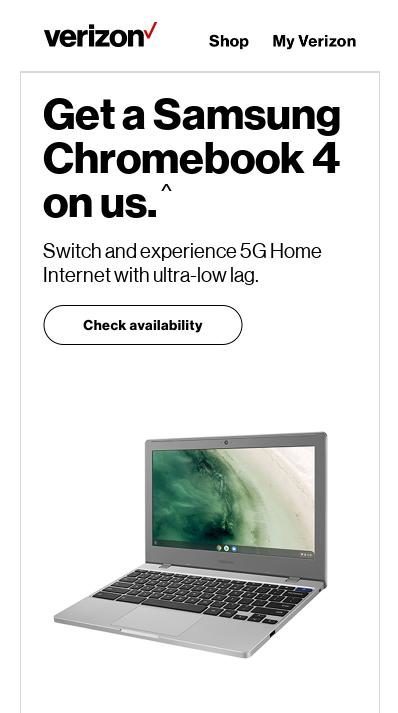 AT&T brought its fixed wireless product back to the mailbox following a holiday hiatus.

Its mailers often targeted rural households; we expect to see much more mail tailored to rural consumers this year, as fixed wireless increases competition in these areas. 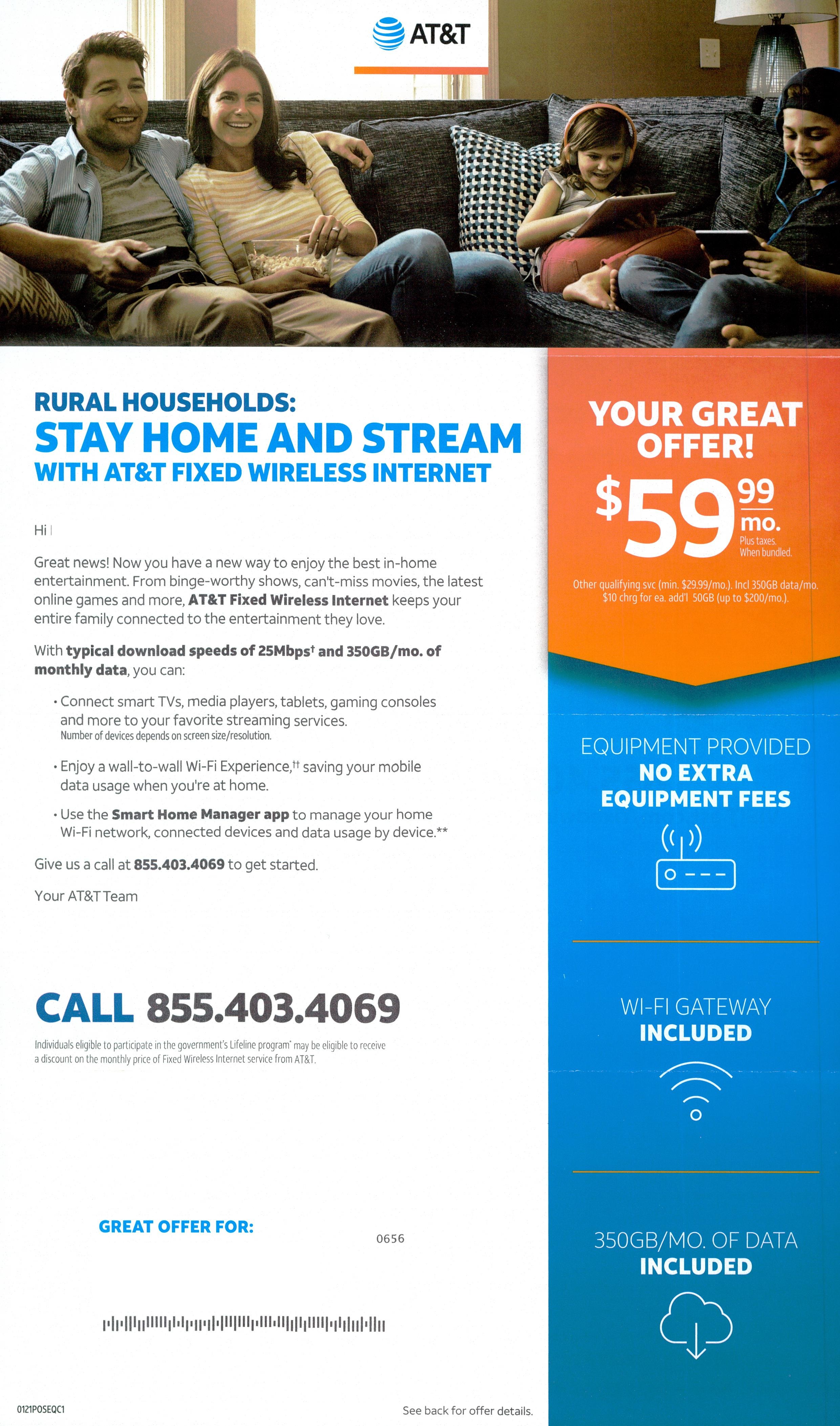 Conversely to Verizon, T-Mobile pulled back marketing for its fixed wireless product in Q1 2021, but could be preparing for a larger blitz in Q2. Given that fixed wireless was a key pillar of T-Mobile’s April 2021 Un-carrier announcement, we expect another ramp up in marketing to follow. Plus, moving season is prime time for internet marketing.

Coinciding with its announcement of expanding Home Internet into 450 new cities and towns in October, T-Mobile ramped up its digital marketing efforts. However, overall marketing spend on the product has since declined, reaching zero in February 2021.

T-Mobile’s email activity also dropped off after November 2021, but Home Internet messaging is trickling back into customer communications.

After T-Mobile’s April event, in which it announced Home Internet availability to over 30 million households, customers received an email relaying this news and more. 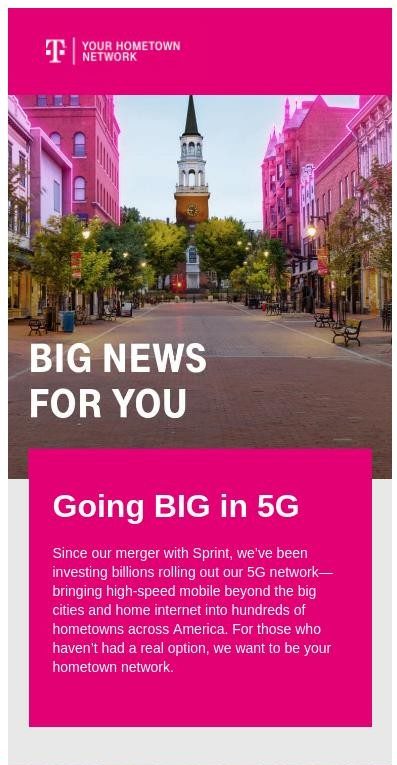 Fixed wireless markets are wide and varied, but the battle to bring connectivity to rural areas is expanding and will likely continue to do so with the current administration’s infrastructure plan, which includes broadband accessibility in underserved areas. With carriers already able to bring connectivity to more areas through fixed wireless, expect them to focus on attracting as many subscribers as possible before the competition increases. T-Mobile, especially, has made a big PR move to highlight the ways it is supporting rural communities, alongside greater connectivity with fixed wireless.

The pressure is on to stand out and connect with these communities. In addition to the direct mail efforts we will continue to observe, we anticipate grassroots marketing to become a greater focus for fixed wireless promotions, too. As outlined in Comperemedia’s 2021 Omnichannel Marketing Trend “Go Small or Go Home,” brands will tap into local pride, which many are feeling keenly due to the pandemic and political climate, and build campaigns and CSR efforts focused on a local approach.