What You Need to Know about the Telecom Win-Back Landscape

As the Telecom industry has settled into an industry standard for win-back incentives, Verizon has experimented with some creative alternatives, while streaming services offer returning customers a bundle that could shake things up for traditional TV providers. Let’s take a deeper dive into the Telecom win-back landscape.

By and large, the most common space that win-back offers exist in is TV. Within this space, the top offers all include some form of pre-paid credit card with values ranging from $200 to $500. However, some issuers have tried to break the mold by offering larger incentives.

Although typically dominated by AT&T, after the COVID-19 outbreak, other providers – like Comcast – increased win-back mail, likely targeting customers who cancelled due to financial hardships faced during the initial stages of the COVID-19 crisis.

Only one-quarter of AT&T offers were win-back, compared to one-third in 2019, with the issuer continuing its DIRECTV win-back strategy. Verizon was the only other mailer with a notable share of win-back mail, at 9%. Overall, share of industry win-back mail was 4%.

Most of AT&T’s offers were for DIRECTV and offered a discount along with free access to premium channels and the Sunday Ticket.

The top email campaign promoted the DIRECTV Select package at an attractive $39.99 price point. Below the initial offer, recipients were informed returning customers also receive a $200 Visa Rewards card, and four premium channels at no extra charge for the first three months. 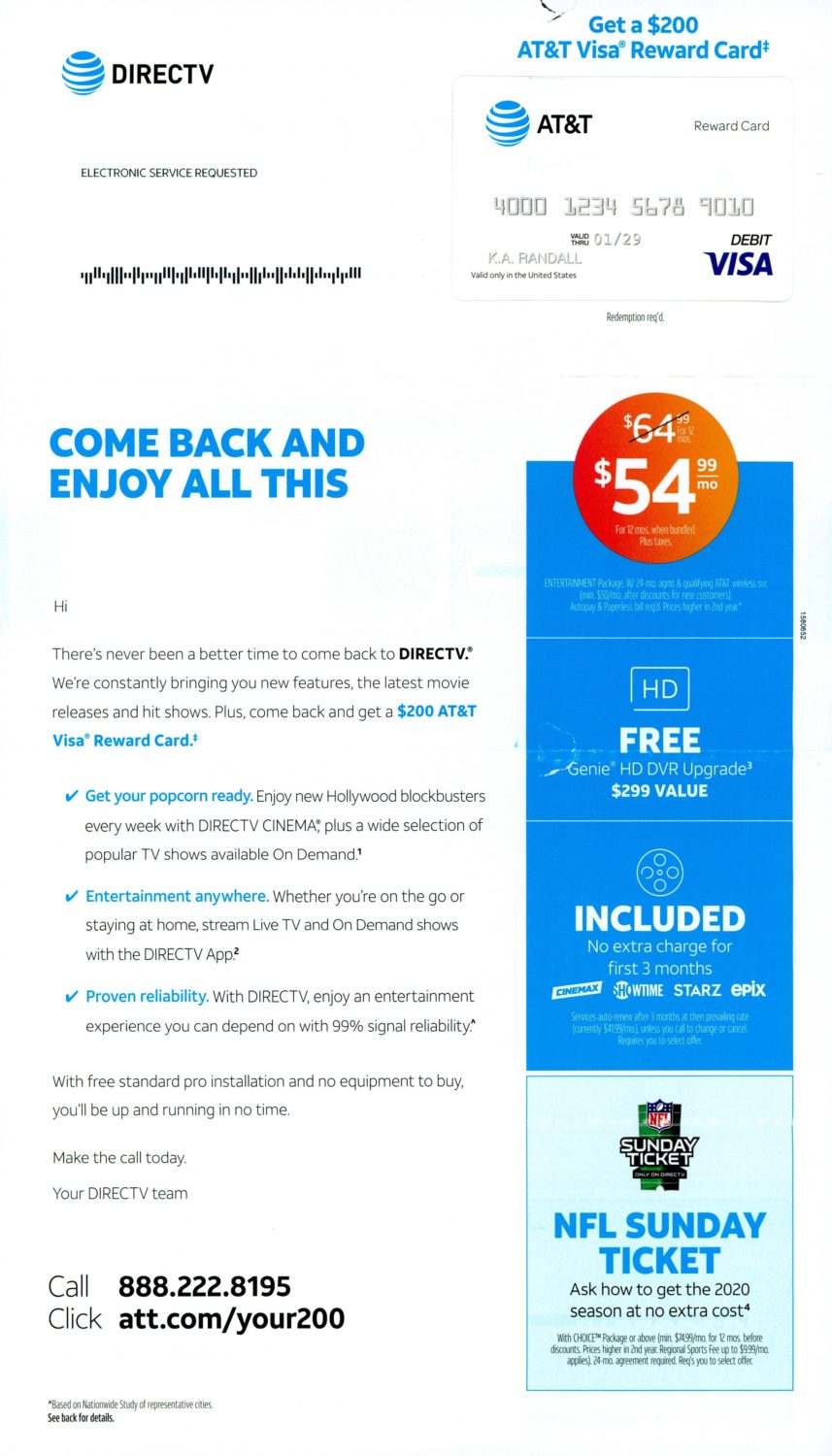 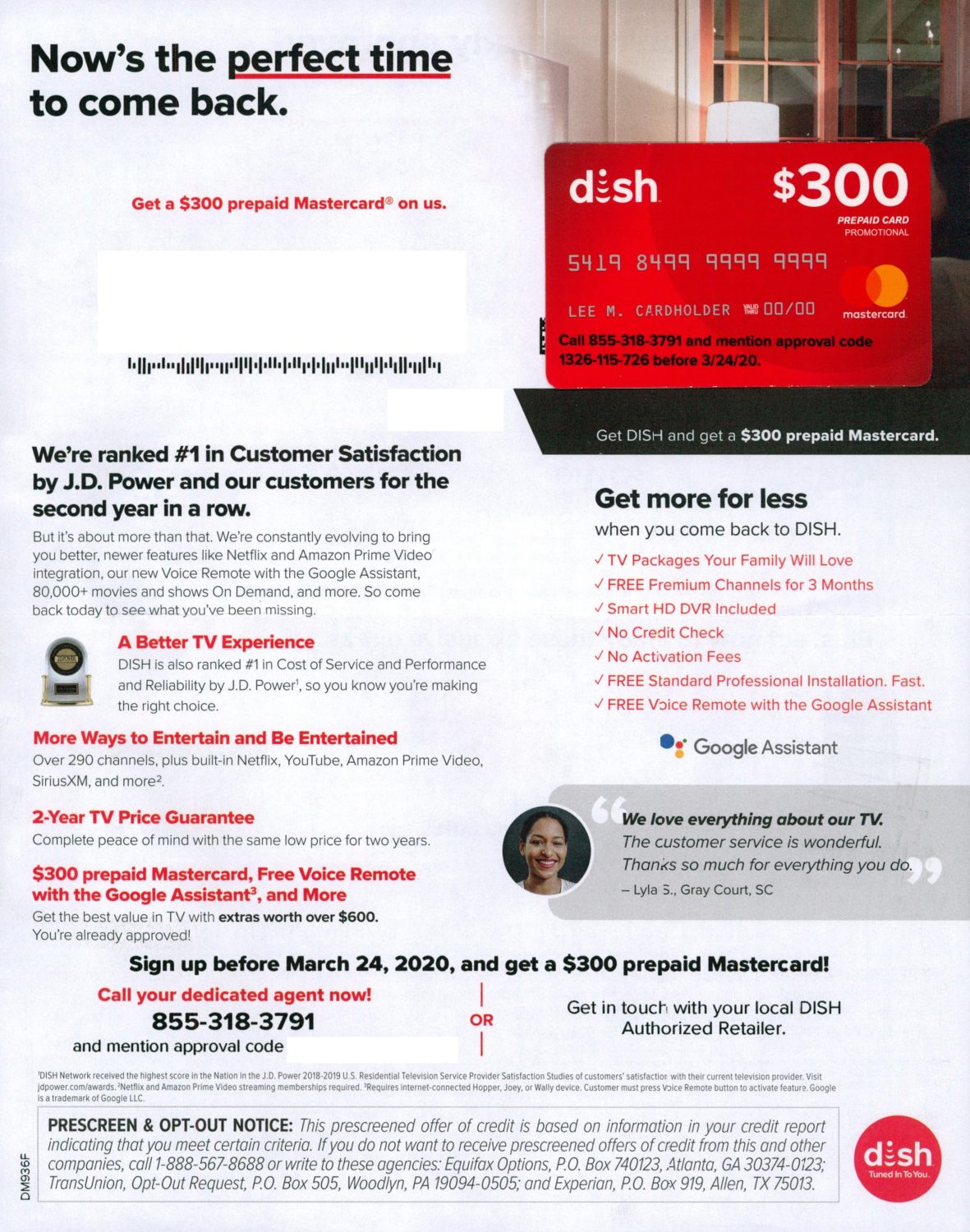 As for its digital campaign, Dish sent win back offers for its Sling TV product during the holiday season. Dish offered a $30 credit for returning customers, compared the service to competitor price points, and promoted “Sling Watch Party.”

In Q3 2020, Comcast initiated a significant campaign to encourage people to return to Xfinity, promoting Peacock Premium access and a $500 Visa Prepaid Card, Netflix included, and $10 off the monthly bill. The win-back efforts were exclusively done via direct mail, with no email offers observed.

Frontier attempted to win back customers with the strength of its service price point, instead of lucrative incentives. Frontier sent campaigns offering returning customers 500/500 Internet for as low as $39.99 per month for 12 months with no commitment. The go-to monthly price is unlisted, with the fine print simply informing customers that the price will increase, and Frontier’s offers are notable in that they do not provide returning customers with pre-paid credit card rewards. 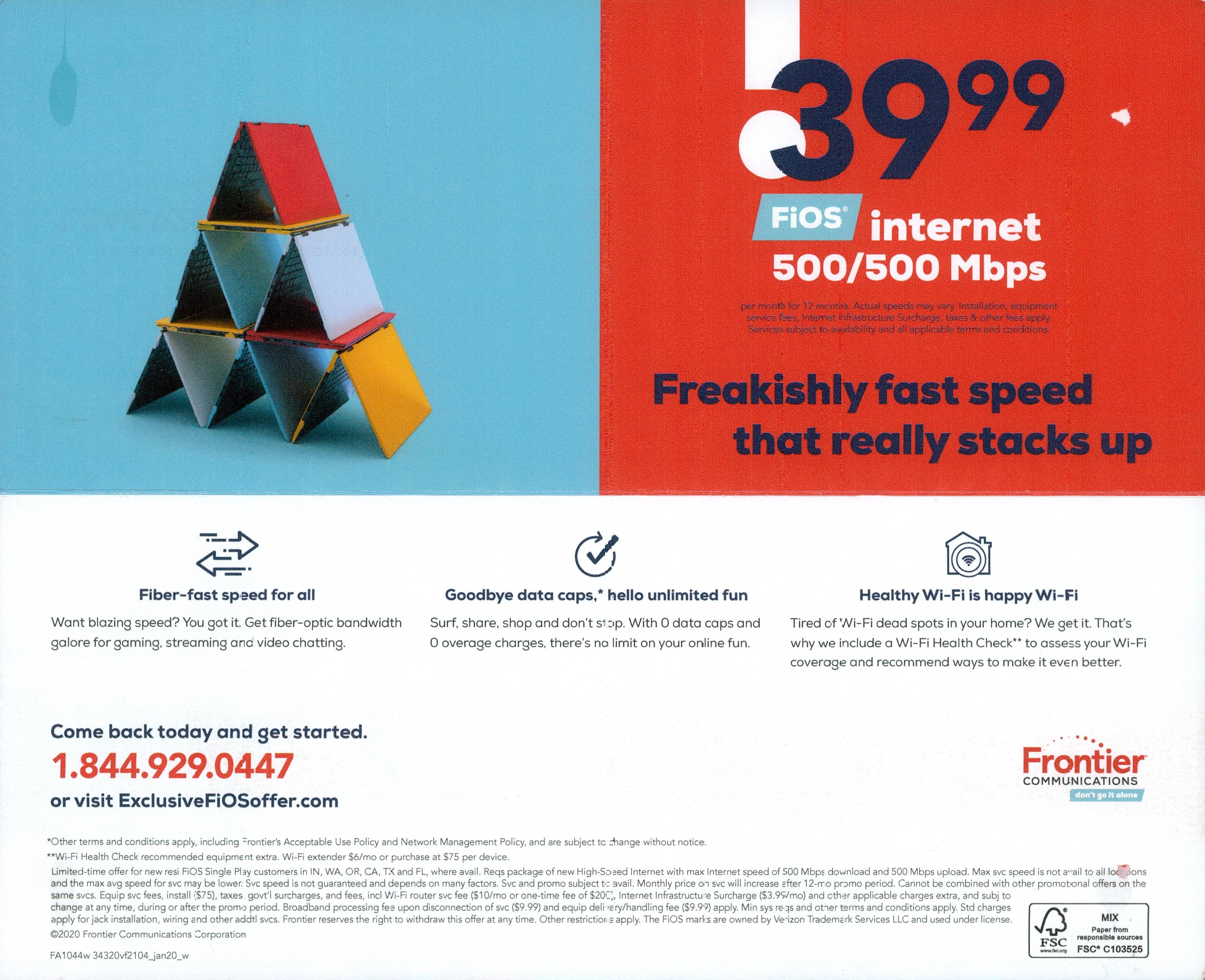 Verizon pushed the offerings even further by offering up to $850 in bonuses to returning customers, including the Avengers videogame, one year of Disney+, one year of Hulu, and free stream TV. 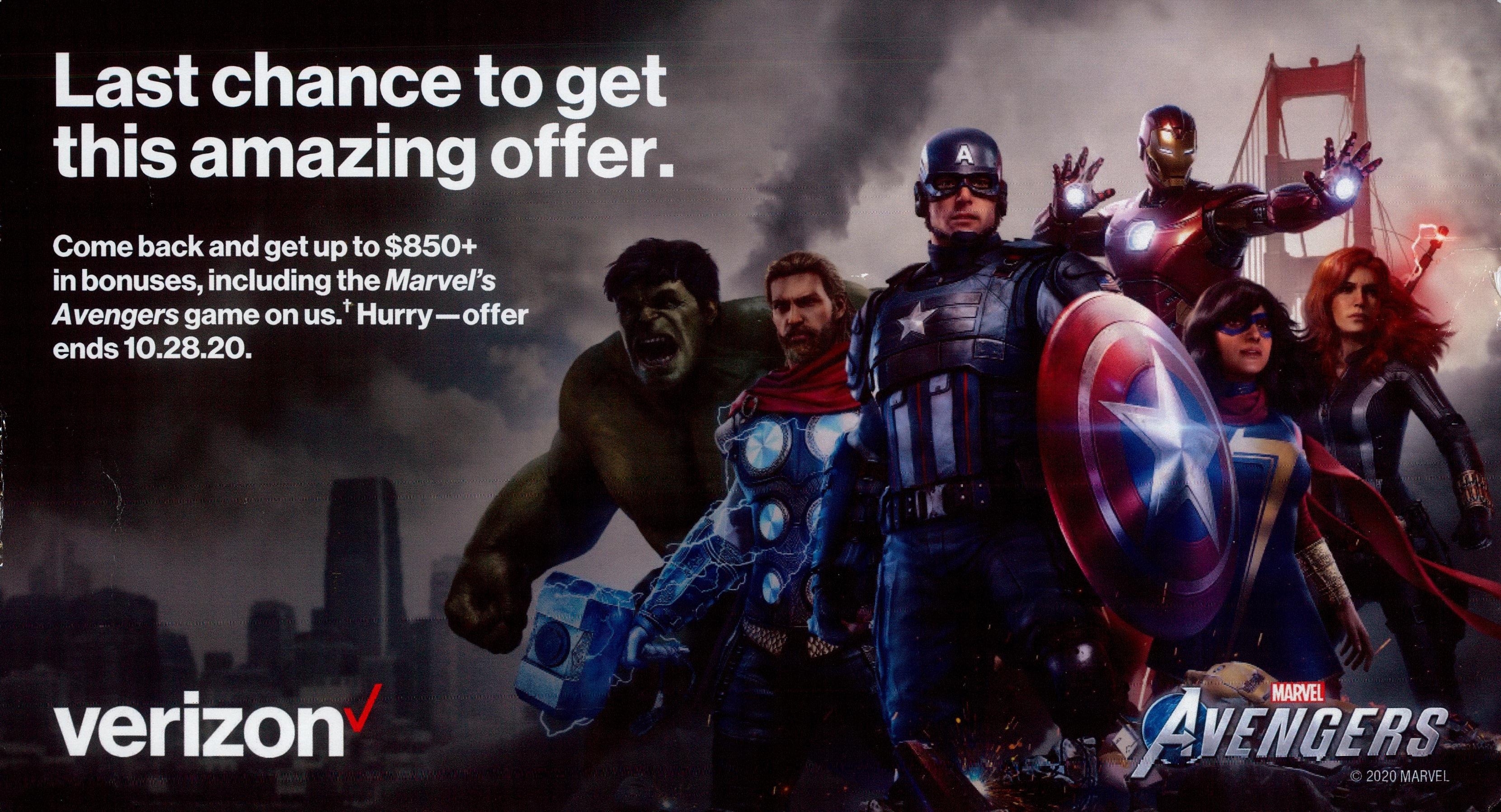 The company also reached out to customers via email who were on the verge of purchasing or re-purchasing its service to encourage them to come back and complete their transaction, offering to waive the setup charges for these customers.

In an early 2021 offer, WideOpenWest offered returning customers Internet 100 for as low as $29.99 per month, alongside $10/month discounts on packages up to 1 Gig internet. Gig internet customers receive WOW’s “Whole-Home WiFi” for free. 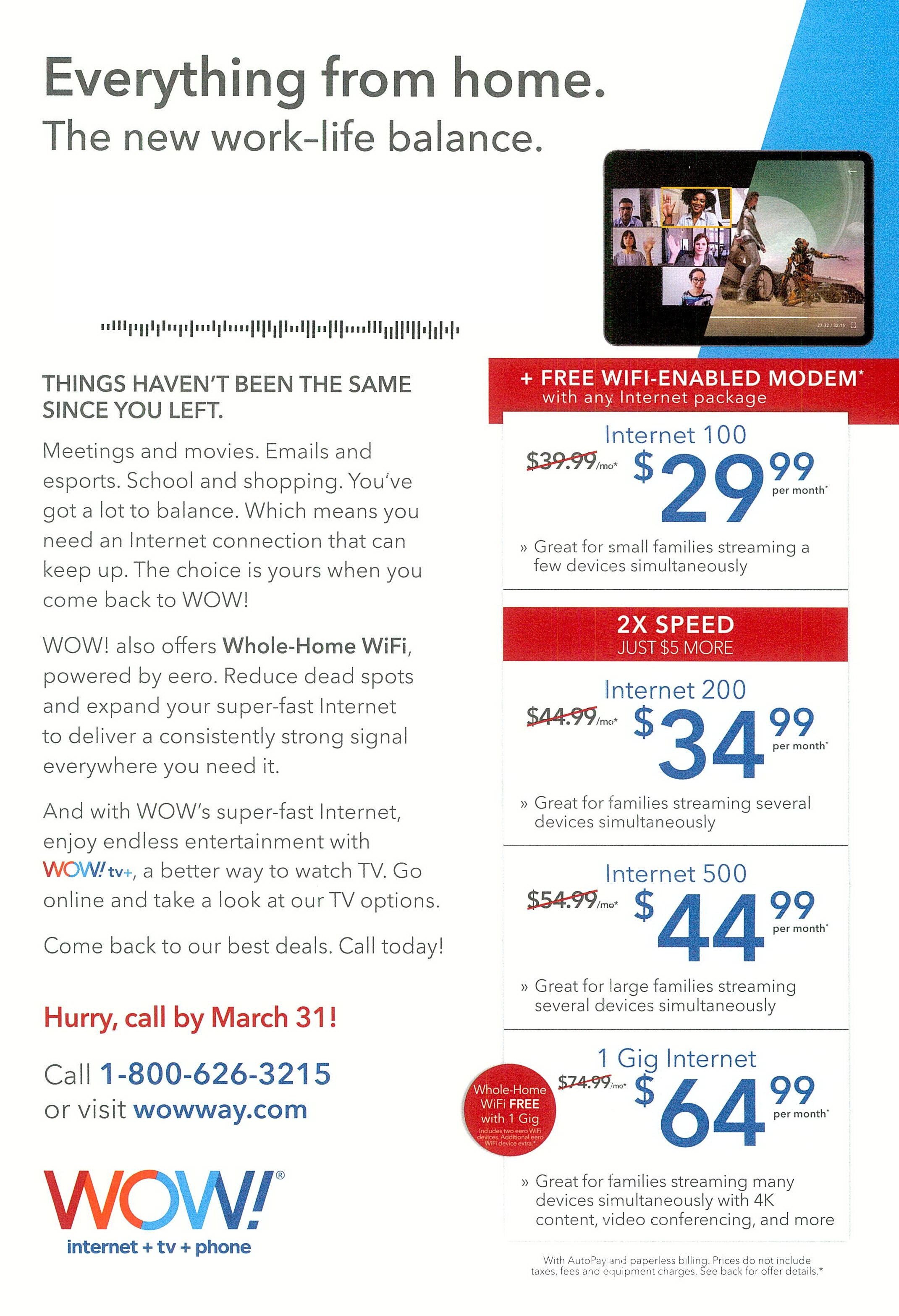 Cogeco was the only Canadian provider observed engaging in direct mail win-back efforts after Q1 2020. With TELUS and Shaw duking it out over better and faster fiber internet, there could be greater win-back activity in Western Canada in the months ahead.

Among top residential mailers, only Bell and Cogeco sent win-back mail, but only Cogeco had a significant share of mail focused on win-back. Cogeco’s win-back offers had envelopes inviting movers to switch back to its service. The actual offer provided returning customers with a $43 bill credit for 24 months on 1 Gig Internet.

Bell’s win-back offer was sent pre-COVID, and offered returning customers a $71/month credit for one year on a $155.90/month Fibe TV, Gigabit, and Home Phone offer.

Hulu offered a promotional monthly price for returning customers for a limited time. Within the email, Hulu featured a variety of popular programming.

Hulu, in partnership with Disney+ and ESPN+, offered a bundle deal for $12.99 per month to entice returning customers. The email included top programming from each service. When streaming services begin to incorporate live sports or other live programming into their bundles, traditional TV providers will have an even greater hurdle to overcome.

For mobile providers, device discounts are the win-back name of the game. Providers were commonly observed offering up to $750 off new devices when customers return on select plans. Some providers, like U.S. Cellular, even offered BYOD alternative incentives for returning customers that wanted to keep their devices.

After a slow Q1 2020, win-back offers spiked in Q2, falling steady throughout the year. After a Q4 dip, Verizon significantly increased its offers in Q1 2021, which could signal increased port-outs from the carrier during Holiday 2020.

Verizon was the only major provider engaging in win-back as a primary acquisition strategy. It leveraged personalization, programming, and hardware incentives in win-back efforts. 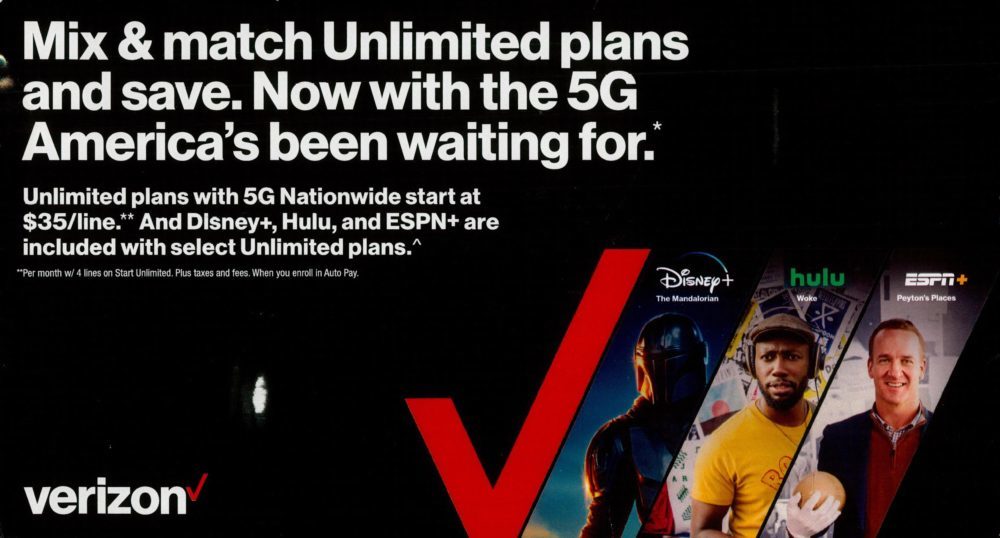 Verizon featured its mix and match plans and 5G in win-back mail. The campaign promoted the inclusion of the “Disney Bundle” for free with select plans, a low $35/line entry price point, and the ability to mix and match service plans for a personalized experience.

Other direct mail win-back efforts touted access to the Discovery+ suite of channels in addition to $750 off the best phones on select trade-in and select plans.

Consumer Cellular targeted low-income consumers for affordable win-back options. This campaign promoted the brand’s unlimited talk and text plans for $25/month, with options to drive the price even lower for consumers looking for an even better deal. The campaign touted Consumer Cellular’s JD Power Customer Service rating, lack of contracts, and customizable plans. 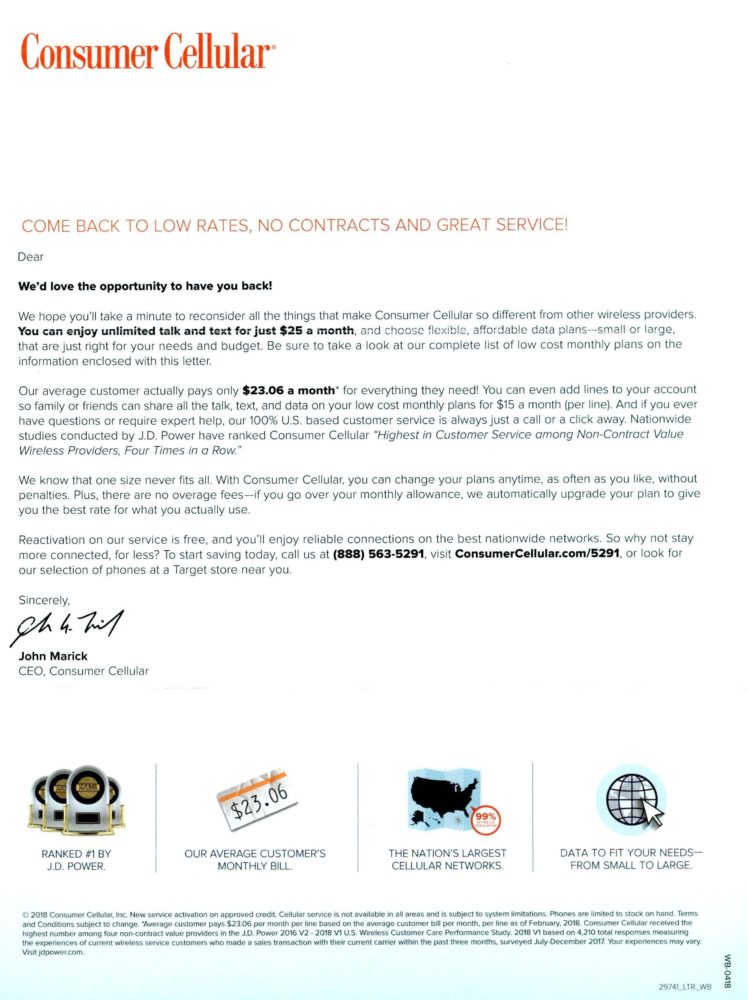 U.S. Cellular invited customers to come back to save $700 on new smartphones.

TracFone offered hardware and service discounts to returning customers and stayed engaged with “Welcome Back” mailers. After enticing customers to come back, TracFone engaged them with upsell offers and encouraged them to download the My Account app and enroll in Auto-Refill. 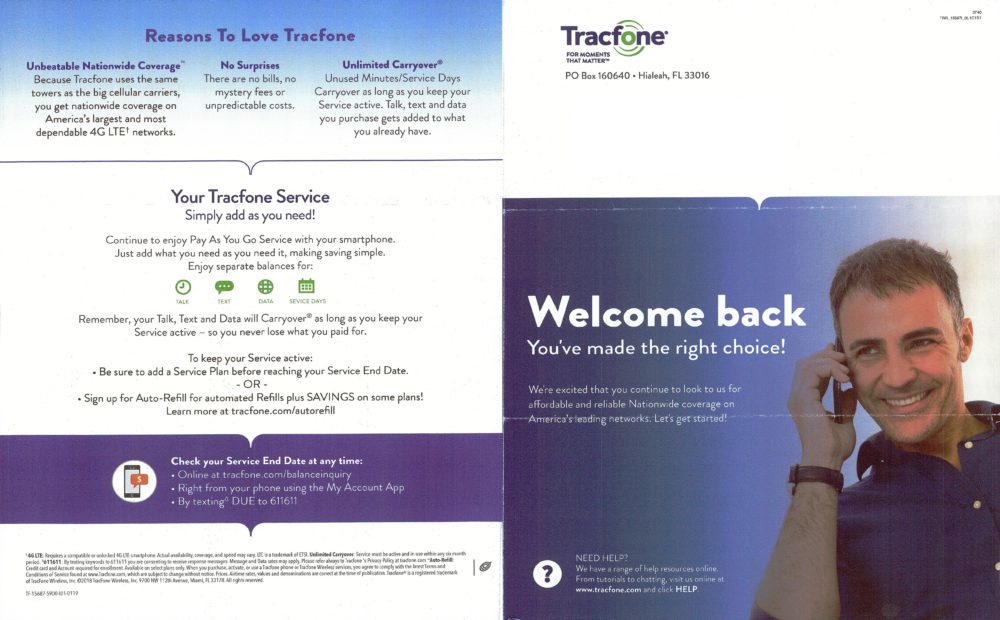 Win-back mail was largely absent in the Canadian market in 2021, as the main telecom providers – Rogers, TELUS, and Bell – remain entrenched in their various markets and Canadians have few other options to turn to. As a result, the few campaigns that have been observed are not incentivized nearly to the extent of what is being observed in the U.S., with win-back incentives largely limited to temporary monthly statement credits.

Comperemedia, a Mintel company, is an industry-leading competitive marketing intelligence agency. To find out more about Comperemedia’s products

Direct Mail Direct Mail Special Reports michaellloy
Channel Sponsors
BRAND United is made possible by the teams and companies who are the driving force behind innovative technologies that allow brand owners and marketers to create a unified customer experience.