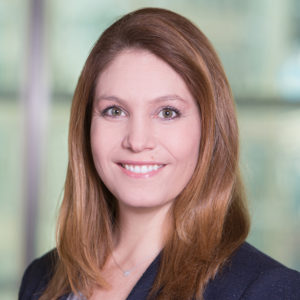 A Test Campaign to Create Synergy Between Direct and Digital

McGinn’s idea of a direct mail campaign went well beyond generic postcards and random promotional items, though. At a former job, McGinn was the unhappy recipient of multiple water bottles, a cactus, and other irrelevant gifts from agencies seeking her attention — so she knew better. McGinn discovered PFL, a Montana-based tactile marketing automation company, when PFL presented on account-based marketing at Salesforce’s Dreamforce conference. “We looked at a couple of their competitors, and one of the reasons we chose them was because of their ability to integrate with the rest of our tech stack,” said McGinn. PFL has native integrations with all of the platforms that Arxan was already using to manage lead generation and other sales activities, including Salesforce, Marketo and Demandbase. “We also just liked their creativity,” McGinn added. PFL has more than two decades of experience taking the concepts people love about digital marketing — the relatively low cost, the ability to customize text and images, and the ability to distribute millions of units with ease — and merging them with direct mail to deliver remarkable brand experiences for target accounts. Arxan believed that with PFL’s help, they could break through the digital clutter and grab the attention of busy prospects. McGinn’s intent was not to completely abandon digital marketing, but to create synergy between the two methods. “We know direct mail has better response rates than digital media,” said Daniel Gaugler, PFL’s chief product and innovation officer. “But when you can orchestrate direct mail with your email, with your sales efforts, with your digital banner ads — all of those components build upon one another, and you get a much greater response rate.” 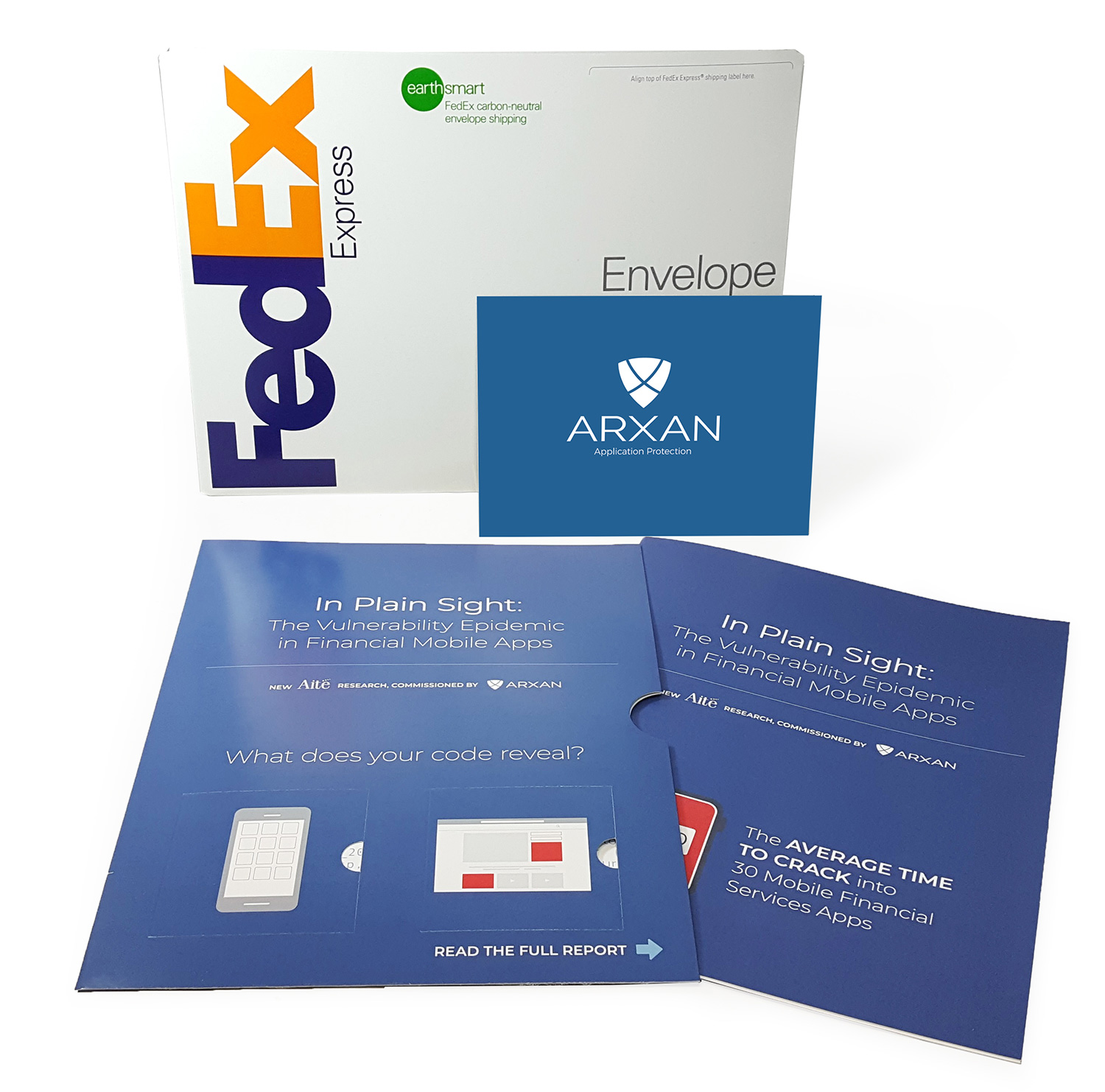 Arxan first sent two mailers via FedEx to warm up prospects. One was a risk assessment survey, and the second was an analyst report that explained how easy it is for hackers to gain access to sensitive information via mobile application vulnerabilities (seen here). McGinn decided to run a test campaign to determine whether direct mail would help Arxan reach their most elusive prospects — those who would benefit from the product, but were so inundated with sales reach-outs from security businesses that they had become immune to pitches. The test subject: Arxan’s new Threat Analytics product, a monitoring and threat intelligence service that alerts customers to application-level attacks in real-time and allows them to stop attacks before they turn into a breach. The target audience for the campaign was a blend of existing customers and brand new prospects in the financial services industry — companies Arxan knew would get the most benefit from Threat Analytics. Then there was the question of what exactly to send. “We didn’t want to explain how [the product works],” said McGinn. “We just wanted to explain the benefit of the product and figure out a way to really bring that to life.” A brainstorming session with PFL ensued, and the result was a creative direct mail campaign that got people talking, persuaded them to investigate the Threat Analytics product and, in many cases, convinced them to take the plunge. 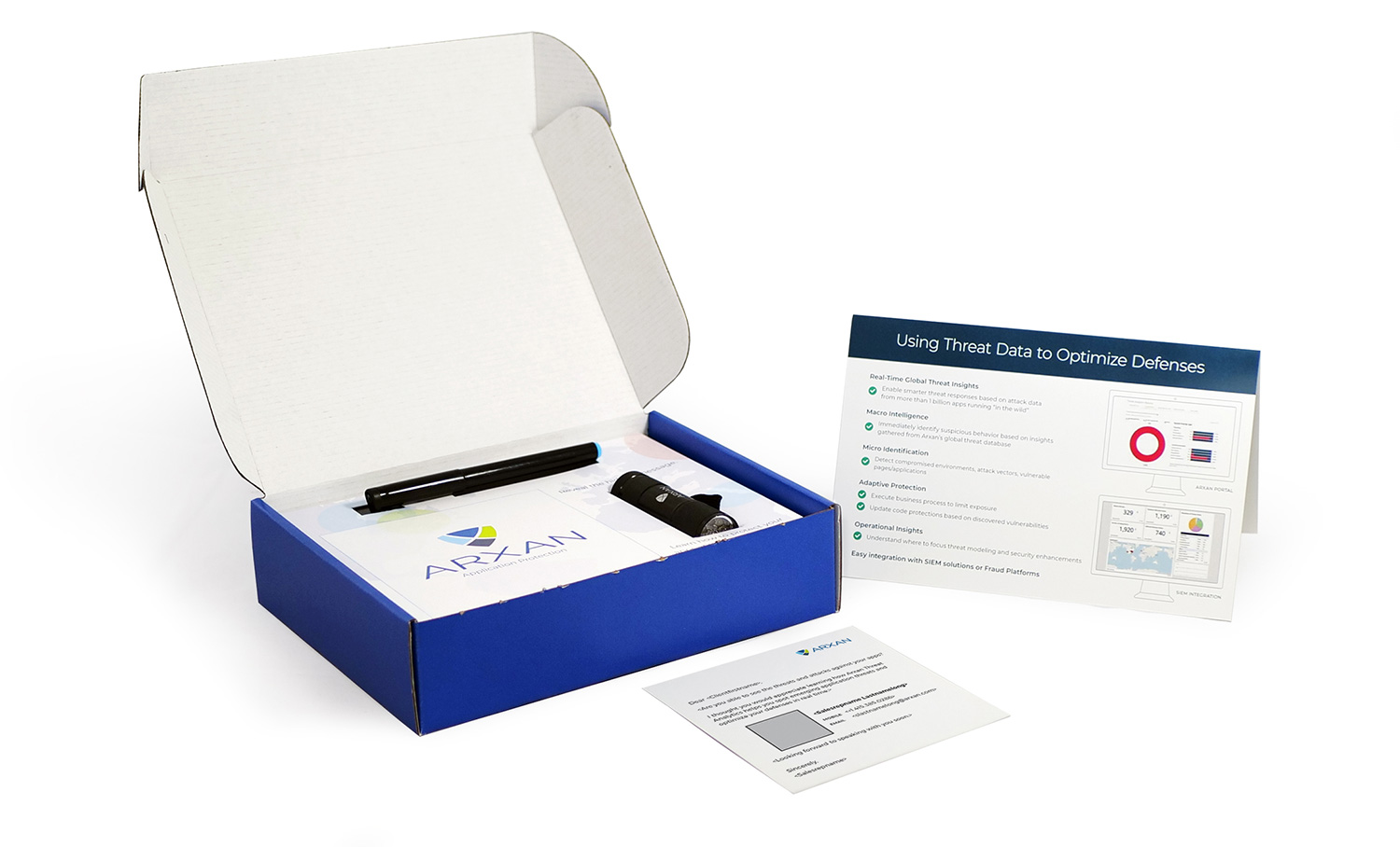 Following the mailers, C-level executives at target companies received an Arxan-branded box that housed a personalized notecard and a small blacklight flashlight that could be used to expose a secret message.

The foundation of the campaign was thermographic ink, AKA invisible ink. This is something most people associate with kids’ toys and games — but cybersecurity is no game, and the use of invisible ink allowed Arxan to really drive that point home. Arxan first sent two mailers via FedEx to warm up prospects: a risk assessment survey, and an analyst report that explained how easy it is for hackers to gain access to sensitive information via mobile application vulnerabilities. Then came the main feature: a custom-printed, Arxan-branded box that housed a personalized notecard and a small blacklight flashlight. This was sent via FedEx to C-level executives at target companies; the delivery method was significant in and of itself, because people associate a FedEx delivery with a higher level of importance. “I don’t know of a single person who would throw away a FedEx package without finding out what’s inside first,” said McGinn. The notecard inside the package addressed the recipient by name, and included a photo of, and contact information for, a member of the Arxan sales team. The notecard also included a “secret” handwritten message in invisible ink. A blacklight flashlight and invisible ink pen were mounted inside the box, asking the recipient to “find the hidden message.” When the prospect turned on the flashlight and aimed it at the notecard, a hidden message was revealed that said, “You miss 100% of the threats you don’t see.” Starting in mid-February 2019, 250 boxes went out to potential customers; 60% went to U.S.-based companies, and the rest to European prospects. PFL took care of all of the logistics — not just the printing, but also the coordinating, handwriting, packaging, and shipping — making a complicated campaign painless for Arxan. PFL even took care of sourcing the components of the packages. “We’re one of the largest promotional product distributors in the country,” Gaugler explained. “We have a network to buy wholesale, and we provide that service to our clients.” “We know direct mail has better response rates than digital media. But when you can orchestrate direct mail with your email, with your sales efforts, with your digital banner ads — all of those components build upon one another, and you get a much greater response rate.” Daniel Gaugler Chief product and innovation officer, PFL 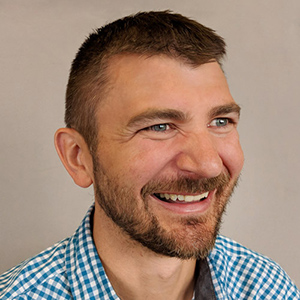 Every sales rep works a little differently, but the overall workflow goes like this: The inside sales rep prospects a target account via traditional channels and tools, such as email and LinkedIn. Once they identify the key decision-makers and complete an awareness activity — like sending an email or the simple first-touch direct mail piece — they trigger the Threat Analytics box mailer. The sales rep gets a notice through Salesforce once the package is delivered, so they can follow up with a call or email. Arxan’s unique direct mail campaign got results fast. After sending just the first 170 direct mail pieces, Arxan generated $4.5 million in new pipeline, with 80% of that being brand new business. The secret message was so intriguing that one recipient, a chief security officer at a company Arxan had been trying to reach for some time, immediately called and said, “This is the coolest thing I have ever received from a marketing team.” She asked to set up a meeting immediately, and a deal is now on the table. “It resulted in a significant opportunity for us,” McGinn said. The total cost for the packages, including printing, packing, and shipping? Just $13,000. “It sounds expensive to send a $50 package to somebody, but not when you consider all the other things that didn’t work,” McGinn said. That $13,000 boils down to $52 per box, which is a good deal, considering that the average direct mail cost-per-acquisition is $71 — and that the campaign is generating millions of dollars in potential business. 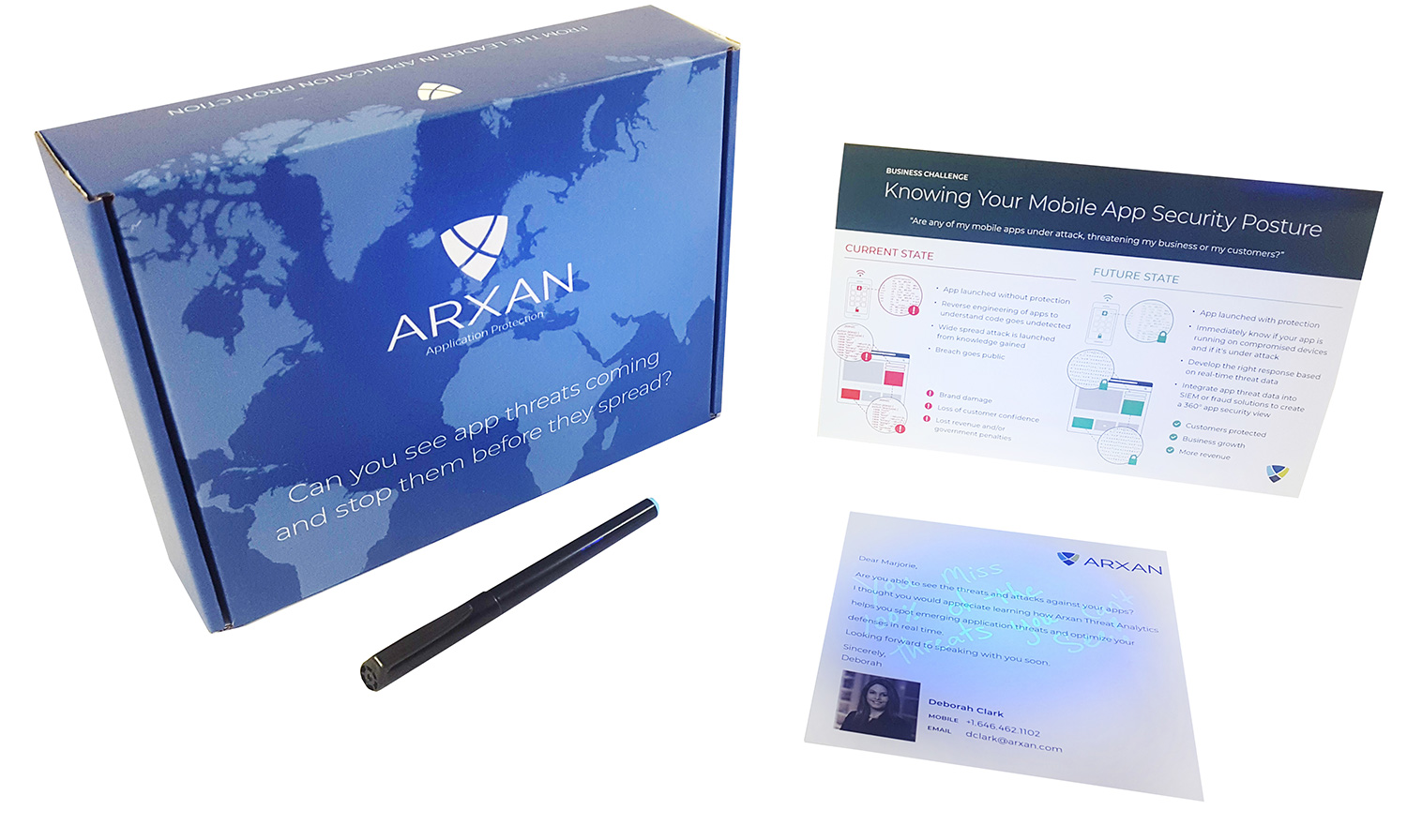 Thermographic ink — AKA, invisible ink — was used on the notecard to share the message, “You miss 100% of the threats you don’t see.” This final package was an excellent punctuation mark on the three-part direct mail series, all of which were delivered by FedEx. The final results of this particular campaign are yet to be determined, because Arxan’s sales cycle is between 9-12 months. But so far, all signs point toward success. “We have two new prospects in the evaluation stage already, which indicates a significantly improved deal velocity — 25% to 30% faster than other deals,” McGinn reported. And the staff who raised their eyebrows when McGinn recommended direct mail? The sales team now asks for additional copies of the direct mail pieces to take to events and client meetings. Said McGinn, “They don’t think I’m crazy anymore.”

Do you have questions about how to implement a project like this? We’ll connect you with industry pros and to get them answered.

Are you looking for practical insight on how this works? These tips will help you generate ideas and make sure your project goes smoothly.

Are you ready to find a service provider near you and get started? We've got you covered.